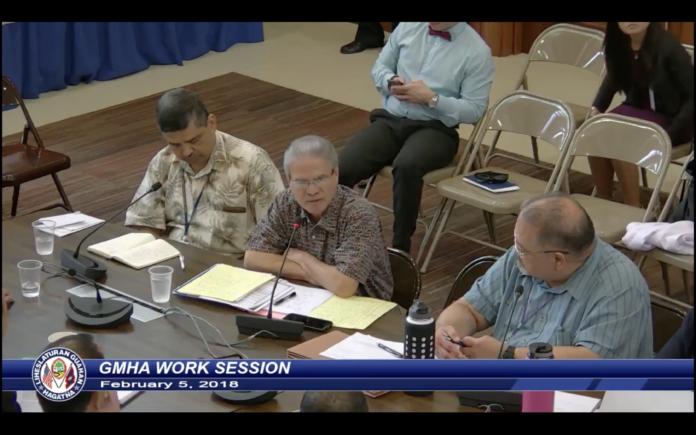 Guam – At a legislative work session today for the Guam Memorial Hospital, lawmakers and hospital administrators clashed over funding needs for GMH, at times the relevant topics being lost in heated dialogue.

It’s the first time both sides have come to the table since the controversial release of the Joint Commission inspection report that details why the hospital could lose its accreditation.

At times, even GMH CFO Benita Manglona acknowledged her message was repetitive.

“We’re negating the bigger picture here of funding. I know, I know I sound like a broken record and you don’t wanna hear it from me again, but I have to say there have been many reports,” said Manglona—referring to officials reports, including one from the Office of Inspector General that agreed GMH lacks sufficient funding to be able to operate properly.

GMH CEO Peter John Camacho told senators although the Joint Commission does not cite funding anywhere in its recent notice of preliminary denial of accreditation, it has acknowledged in another letter that funding shortfalls is not an uncommon source of loss of accreditation.

While lawmakers pressed GMH administrators for details about their specific needs, the hospital continued its broader push for more money.

“Just last Thursday, the ICU doctor came to my office and he said, ‘You know, we need to hire travel nurses because we’re gonna lose two of our ICU nurses … are being recruited to the mainland and they’re leaving, so does that mean we’re gonna go down to four beds?” Manglona shared. GMH’s ICU department has been down to six operational beds out of the 14 they have available because of a nursing shortage.

“No offense,” Speaker BJ Cruz followed up with Manglona on the two ICU nurses. “How much would it cost to keep those two nurses?”

“It’s not how much … to keep those two nurses; you have to look at the 400 nurses. You’re gonna try to make those two nurses happy at the expense of the 400 other nurses that are there,” Manglona asked in response.

And if a Joint Commission report threatening revocation of accreditation isn’t enough, the hospital must now also gear up for a survey from another accrediting body: the Centers for Medicare and Medicaid Services. Losing CMS certification could be much more disastrous for the hospital since Medicare funding is contingent upon CMS certification.

All lawmakers present made similar requests: that GMH provide a list of priorities of issues that need to be addressed in order of importance as it pertains to CMS accreditation. The senators all agreed that there seemed to inconsistencies in GMH’s representations of what issues may be more pressing than others.

Again, GMH deflected, reiterating its need for more funding. This drew the ire of Sen. Regine Biscoe-Lee who went head to head with Manglona; the two talking over each other as they disagreed on what should be provided by GMH for the Legislature to respond to its requests for more money.

Camacho agreed to provide Sen. Rodriguez with this list of priorities with the approximate costs by the end of the week. Rodriguez said the goal was to try to come up with short term solutions while a long term fix is being worked out.