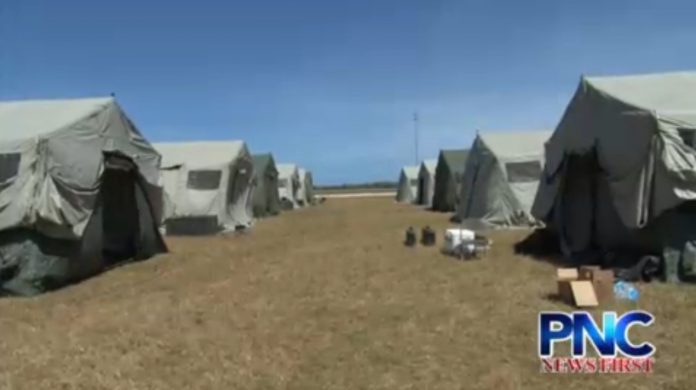 Major Weaver says participating countries in this H-A-D-R scenario include Australia, Japan, the Philippines, the republic of South Korea and New Zealand.

Guam – As part of Cope North 2016, PNC, along with other civilians and military personnel, traveled to Rota to take a deeper look into the humanitarian assistance and disaster relief exercise.

Lt. Colonel Glenn Rineheart, commander of the 36th Mobility Response Squadron explains that camp Rota, the location of the humanitarian and assistance and disaster relief exercise, houses EMEDS, or expeditionary medical evacuation squadron which exists to treat those who require a high-degree of care…. once the patient is treated, the air evacuation squad will take the patient from Camp Rota to Guam.

“They really go into operating room type of operations but once they’re finished with that patient there’s another entity that comes in, that’s the air   medical evacuation team and their purpose is to take that patient and transport that patient onto the aircraft and take them from the aircraft to a more capable hospital like they do on Guam,” said Rineheart.

The emergency and operating rooms inside the temporary hospital at Camp Rota come equipped with everything a normal or would have. But unlike a normal hospital, the OR/ER at Camp Rota is limited in space and resources. Despite these limitations, the team is able to perform serious procedures to those in need…

Camp Rota is also equipped with a primary care section, a pediatrics division, a labor division and a pharmacy.

At any given time Camp Rota staffs 110 individuals from six different countries. Major Christopher Weaver, Director of Operations for the Mobility Response Squadron.

“We are doing one portion of that which is HA/DR which is another proof of concept that we can work in any scenario that comes to us with our international partners either here or any other part of the world,” said Weaver.

Major Weaver says participating countries in this H-A-D-R scenario include Australia, Japan, the Philippines and the republic of South Korea.