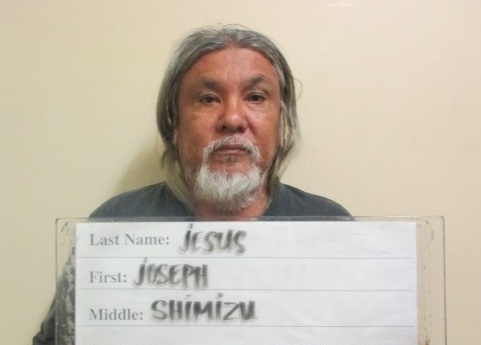 One of the Asan residents who spoke out against the statue of Philippine’s first Prime Minister Apolinario Mabini being constructed in their village was arrested after he allegedly used a sledgehammer to try and bring the statue down Tuesday morning.

According to a magistrate’s report, several witnesses saw 56-year-old Joseph Shimizu Jesus striking the statue repeatedly with a sledgehammer and saying he was “pissed” when he found out that the statue was going to be unveiled this weekend.

Also in the report, Jesus allegedly threw rotten eggs at the Mayor’s official vehicle and was waiting outside the Mayor’s Office to egg the Mayor and her staff with “a dozen Chad’da Gue’ru”.
Asan Maina Mayor Joana Blas says she and her staff were afraid to leave the office because they were scared that Jesus might attack them. She says Jesus is not the only one who does not wish to have the statue in their village and says she also received threats on her Asan Maina Facebook page regarding this issue.
According to the report, Jesus admitted to damaging the Mabini statue. Back in December, when the Mabini statue was still being constructed, we spoke with Jesus and he told PNC that he was mad at Mayor Blas for not informing residents about the statue and asked why the statue of Mabini has any relevance to the village.
Blas says the unveiling has been delayed until June, when a park and playground will be constructed in the same location. She says she does not want any more trouble.
Jesus was charged with Criminal Mischief with a Special Allegation of Crime Against the Community, Disorderly Conduct, and Harassment.