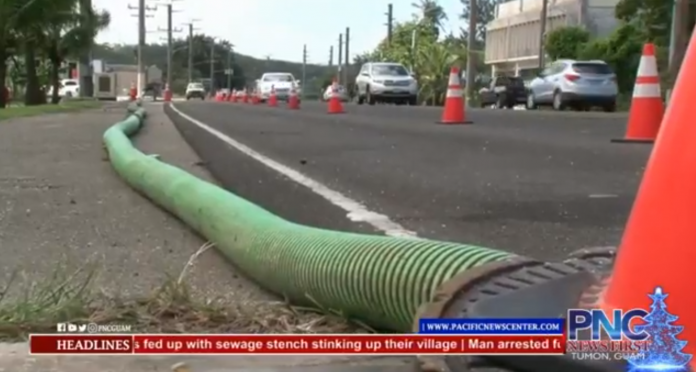 Guam – The residents of Asan have been plagued by the putridity of a broken sewer pipe for years now. The stench is unbearable for residents living just a stone’s throw from the source of the smell.

According to GWA’s spokeswoman Heidi Ballendorf, GWA’s sewer collection system in Asan recently experienced a damaged gravity line.  Crews have set-up a temporary emergency by-pass line pump until a contractor can mobilize to make repairs. GWA obtained approval from the Public Utilities Commission (PUC) on November 29th to award a multi-million dollar contract for “Route 1 Asan-Adelup-Hagatna Sewer Rehabilitation and Replacement Project,” and is currently finalizing the contract for the work. However, the area causing the most issue at this time is being prioritized for immediate repair since the contractor has already been determined.The project will permanently address the issues with these older sewer lines and prevent future occurrences affecting ratepayers in the area.

According to one resident, who lives just a stone’s throw away from the generator, that’s just not good enough. Furthermore, this is not the first time that this has happened, and it wasn’t too long since GWA fixed this same issue. “Well I would say, its been broken for a month now. But before that, we’ve been dealing with this for years” says Asan resident Michelle Taisague. Taisague adds that “I go to school online, so I have to keep the door closed because of the noise; and the smell, it’s very terrible…so downwind is best.”

But that’s not all that’s bothering Taisague. WIth crews from GWA being right outside her house for almost a month now, nobody from GWA has ever been able to give her an answer as per to whats going on. “It’ been over a month, and nobody has said anything to any of us.”

PNC was able to reach out to Asan Mayor Frank A. Salas, who acknowledged that there was a sewer issue in the vicinity of the old Harley-Davidson on Marine Corps Drive. When asked if he knew how much longer would this issue affect his residents, he stated he too, was unable to get an answer from GWA because nobody at the department answered their phones.

PNC also reached out to the Guam Environmental Protection Agency Spokesman Nick Rupley Lee who stated that “Our Water Pollution Control Program is aware of the collapsed line in Asan. We understand that the section of the line that is under repair has been capped off and will not leak.”