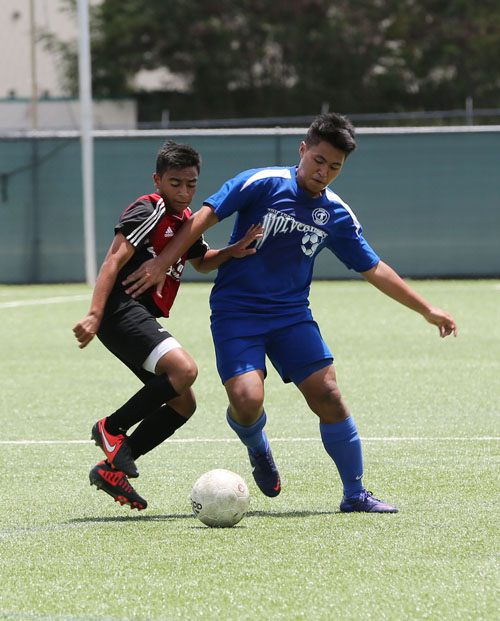 Guam – The ASC Islanders Betde found themselves in an unfamiliar predicament early on in the championship match of the Chevrolet Robbie Webber Youth Soccer League U17 division – down 3-0 – but tallied four goals in light of the deficit for the 4-3 victory at the Guam Football Association National Training Center.

The Islanders Betde capped their undefeated season with the division title over nemesis Wings Red, the only team that managed to force the champions’ lone draw in the regular season.

The Wings Red’s Gen Fudo quickly put up his team 2-0 early in the contest, with shots from the left wing. Moments later, the Wings Red emerged with a commanding 3-0 lead when Isaiah Lagutang managed to curve his free kick around the Islanders Betde wall and into the goal from the top of the penalty box.

[The Wolverines’ Napu Mesa fights to keep possession of the ball with the Wings Black’s Shashikant Kotwal during the consolation match of the Chevrolet Robbie Webber Youth Soccer League U17 division at the Guam Football Association National Training Center. The Wings Black defeated the Wolverines 5-2 to claim third place in the division playoffs.]

The Islanders had chances at the goal during the Wings Red’s scoring spree, but a combination of Joseph Cho’s goalkeeping for the Wings and the crossbar prevented most close shots. The Islanders finally got on board before the halftime whistle when Ryan Quitugua powered in a right-side cross from Keiki Kunios.

The Wings Red, playing without any substitutes, moved into a more defensive game minutes into the second half, as injuries had the team down to nine players in a few instances before the players re-entered the game. With fatigue setting in, a defensive error by the Wings Red allowed a right-side cross to meet Sora Recella, who opened scoring for the Islanders in the second half. Later, a Jared Pangindian free kick into the penalty box was mishandled by Cho and the Islanders’ Cedric Sevilla managed the push the ball into the goal amid a scramble in front of the goal for the equalizer.

Both teams upped their offensive efforts with a penalty kick shootout looming, but it would be the Islanders to sneak in one last goal before the final whistle. With a free kick launched into the penalty box, Austin Cardines found a shot through the Wings’ tightened defense, sending Islanders fans into a screaming frenzy. 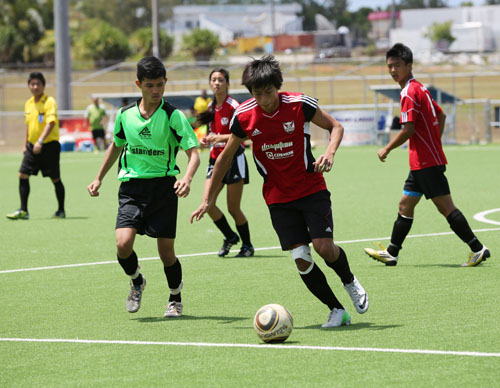 [The Wings Red’s Gen Fudo moves the ball out of the penalty box as the ASC Islanders Betde’s Sora Recella looks for an opportunity to steal the ball during the championship match of the Chevrolet Robbie Webber Youth Soccer League U17 division at the Guam Football Association National Training Center. The Islanders Betde claimed the title with a 4-3 comeback win over the Wings Red.]

The Wings Black had better luck than their Red counterparts in the consolation game against the Wolverines, earning third place in the playoffs with a 5-2 victory. The Wings Black’s Ryo Sakane finished with a hat trick and teammates Phillip Caguioa and Thomas Park each scored once for the winning team. Jay Cruz and Nathan Camacho scored for the Wolverines.

In earlier semifinal match ups, the Wings Red edged the Wolverines 2-1 with a goal each from Agustin Choi and Fudo. Napu Mesa scored the Wolverines’ lone goal. The ASC Islanders Betde stamped their ticket to the finals with a 4-1 victory over Wings Black. Kevin Singeo, Cardines, Quitugua and Sevilla each scored for the Islanders. Sakane scored the Wings Black’s lone goal.

The finals of the U17 division officially closed the Chevrolet Robbie Webber Youth Soccer League 2013 spring season. In the pipeline is a youth futsal for U10 and U12 teams and youth beach soccer tournament for U14 and U17 teams scheduled for June 15.