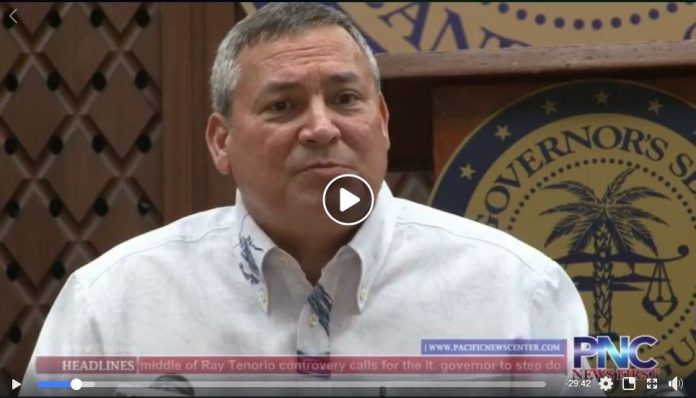 Depending on whom you talk to, either Lt. Gov. and Public Safety Czar Ray Tenorio is good for the job, or he just plain needs to go. And now it’s one man’s word against another’s as Gov. Eddie Calvo stands by his second in command while an assaulted policeman’s brother accuses the governor, lieutenant governor, and police chief of covering up the facts.

On Newstalk K57’s Mornings with Patti Arroyo show on Friday, Bill Cruz called out Police Chief J.I. Cruz for failing to defend his brother in the uproar after the gun grab; called out Gov. Calvo for complicity; and called out Ray Tenorio for swiping his brother’s firearm in the first place—and then scapegoating his brother by implying his account is false and politically motivated.

“The governor is not even saying anything or even standing up for what’s right, and just letting Ray go out there and do all that stuff. It’s just sad that this all has to take place, and then he’s making my brother—trying to make my brother—look like he’s a fool. And it’s true, he’s lying, he’s lying from the get go. But I understand why he’s lying, because a lot’s at stake.”

Lt. Gov. Tenorio is running as the Republican nominee for governor of Guam.

“If this ever happened in the states, Ray Tenorio would have been stepping down and the governor himself would come out,” Bill Cruz said. “I mean it’s even to the point where we feel that J.I. Cruz is not a good leader. He needs to step down too, because he didn’t have my brother’s back. There’s a thin blue line within the police force.

“Come on, you need to stand up for your subordinates! I’m not saying [this] to say whether he’s right or wrong, but he chose to be more political about this in his silence.”

Meanwhile, during his Mandana 2.0 public safety press conference on Friday afternoon at Adelup, Gov. Calvo stood up for his lieutenant governor, while Ray Tenorio and J.I. Cruz sat next to him.

“I can tell you that the incident regarding the lieutenant governor will take its course through the courts, and, obviously, I’m hoping for a favorable outcome of that,” the governor said. “Let it happen. But also I have a responsibility as a governor and I’m not going to politicize this.

“The lieutenant governor—long before the event that occurred that is now the focus of talk show hosts and is now in the courts—I appointed him as my czar on public safety and he’s done a great job of it, so he still has oversight over the general supervision of the day-to-day on public safety.”