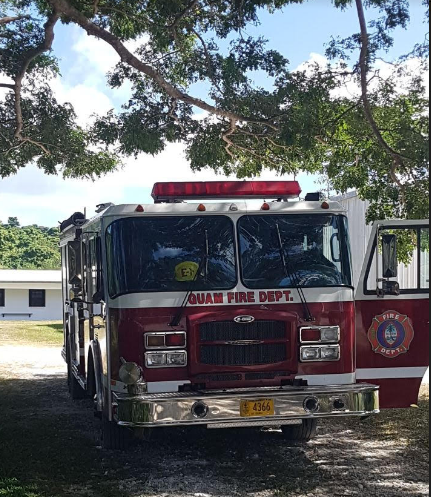 Guam – The legislature went into session this morning(Fri.) and immediately recessed until Tuesday at 2pm. As a result, the governor’s office called a press conference to announce the closure of two fire stations. GFD Assistant Chief Joey San Nicolas says if lawmakers don’t pass a bill raising taxes today, the Astumbo and Piti fire stations will close on Sunday.

“We were hoping for some sort of a solution to have been passed this morning,” said Governor’s Director of Communications Oyaol Ngirairikl. Instead, lawmakers recessed until Tuesday at 2pm. In response the governor revoked his previous call to session, sent down a new bill that would also raise the business privilege tax by 2%, called senators back into special session at 1pm and held a press conference announcing the closure of two fire stations.

“We are now facing a situation that has given me no choice but to degrade our ability to meet our mission mandates which could ultimately result in the loss of life or at the very least lessen our community’s confidence that life saving measures are available which endangers the quality of life for all. To that point, the Guam Fire Department will make effective this Sunday March 4th 2018 at zero 800 hours or 8am the following: One, the closure of Piti and Astumbo fire stations and the unit assigned which includes the fire trucks in Piti and the fire truck and ambulance in Astumbo. We will combine our two advanced life support units that respond to over 12 hundred calls a year into one. We will merge the Dededo fire truck and the rescue one unit whose primary responsibility is land search and rescue and the operation of the jaws of life to extricate trapped victims into one unit. Four, to reduce all fire truck and rescue unit staffing to a group of three one less than the OSHA and NFPA required staffing for all hazard response. And five, to place on a reduced schedule our code enforcement bureau which will result in significant delay and plans review and fire inspections for the various permits to operate businesses and events,” said Acting Fire Chief San Nicolas.

San Nicolas says this will reduce overtime in order to achieve the mandated ten percent cut. It will save $200 thousand dollars a pay period or $2.7 million in overtime costs for the rest of the fiscal year. “I am now imploring my oversight chair Senator Telena Nelson and the 34th Guam legislature to resolve this crisis before these measures are to take effect because this cannot happen,” said San Nicolas.

However, the legislature’s legal counsel prepared a memo that says the governor lacks the authority to revoke his original call to special session and call senators into another session on another measure while they are in recess. So the legislature opted to stick to their recess until Tuesday at 2pm

But why the Piti fire station when it’s close to potential hazards at the port authority of guam like the power plants one of which exploded a couple of years ago and the fuel tanks one of which caught fire after typhoon Pongsona? San Nicolas said, “We have Agat fire station that’s roughly about 15 minutes away. The next responding station is Tamuning. There is the mutual aid program that we have in effect that includes the Naval Hospital and the Nimitz hill fire stations from the federal. Although they do not negate the need for our Piti fire station, those were factors that we did consider.”

“So, this could put safety of lives we’re talking about here in jeopardy. Why cut here why not cut from some other government agencies?” asked PNC. “Those cuts are being made all over, I think that’s the point that hasn’t sunk in. This is government wide,” replied Ngirairikl. “There’s nothing else that could be cut that would keep fire stations open?” asked PNC. “We were told yesterday that there are no exceptions on the furloughs,” replied Ngirairikl. “So, there’s no overtime in other agencies that can be cut?” asked PNC. “Everyone’s cutting overtime, everyone’s cutting overtime. We said this a few weeks ago. Overtime in all agencies is being cut. They’re even talking about there are contract employees they are limited term appointments. They are not being renewed. So, we have folks who are gonna be out of a job as soon as next week because we are not rehiring them we can’t rehire them,” replied Ngirairikl.

The administration issued a press release this afternoon saying that the legislature recessed for a three day holiday weekend and ignored the governor’s call to action to address the fiscal crisis.

READ FULL RELEASE FROM ADELUP BELOW:

Hagåtña — Today after recessing for a three-day holiday weekend, Acting Speaker Therese Terlaje ignored the Governor’s call to action to address the fiscal crisis, and did not call the Legislature into special session as prescribed by the Organic Act.

In the meantime, the executive branch has begun the furlough process, two fire stations are scheduled to close this weekend, and the employment of approximately 40 Limited Term employees has not been renewed. While senators have recessed for the 3-day weekend, thousands of government employees face uncertainty and others face unemployment.

“The fiscal crisis before us is real. Every day of inaction means we are digging a deeper hole and the consequences grow,” Governor Calvo said.

“This is perhaps the most, dire fiscal challenge facing our island during my seven tenure as Governor, and certain senators don’t seem to get this, or worse — don’t care.”

Speaker Benjamin Cruz left island earlier this week for Bangkok and Senator Mike San Nicolas has been absent from session all week.

If senators don’t get to work on this emergency, the administration is exhausting all legal remedies available.  A legislative solution is required to address the matter before us.