Guam –  20 to 30 families were temporarily evacuated from their homes in the Sagan Linahyan area of  NCS Dededo Saturday night as authorities investigated a reported bomb threat.

A suspicious package was found and taken away.  Authorities have yet to say what was “suspicious” about it, or whether it posed a real threat.

But they took it seriously enough to call in Guam Police, Guam Fire, and the Navy’s Emergency Ordnance Disposal [EOD] team.

Dozens of children and adults were forced from their homes and milled about in the street until Astumbo Elementary was opened up to provide shelter.

It began with an anonymous call made to 911 about 7:30pm Saturday.

Guam Homeland Security and Civil Defense Spokeswoman [GHS/OCD] Alyssa Benito told PNC News the caller reportedly said that 3 bombs would be set off at a pavilion in what’s often called the “Dollar Housing” area, unless Ricky McIntosh is released from prison. McIntosh is one of the acquitted Bank of Guam robbery suspects who is being held on other charges now.

An EOD technician was seen suiting up in a bomb blast suit. Benito reports a K-9 Unit from the Airport Police was brought to the scene at 2:34am. 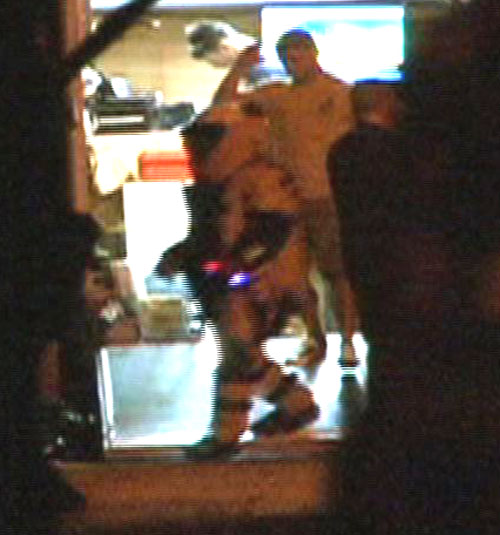 The package was retrieved and taken away. The all clear was sounded at 3am Sunday.

Authorities have not released any further details.

unless Ricky McCintosh, one of the bank of Guam robbery suispects, was relased from prision.