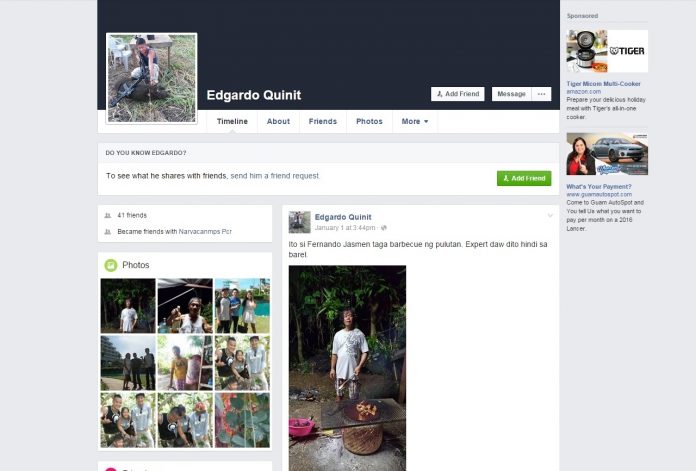 The Guam Police Department says it is investigating the video of several Guam residents seen firing guns into the air to celebrate New Year’s.

Guam – The Guam Police Department is now looking into a video of what appears to be Guam residents illegally shooting firearms into the air to celebrate New Year’s.

The video was initially posted on Facebook and quickly went viral. Because the people in the video are heard speaking a Filipino dialect, it even got the attention of the Philippine government which is also looking into the matter.

The video was first uploaded on Facebook and posted on the account of Edgardo Quinit last Friday but has since been taken down, according to a report on inquirer.net. It’s not clear when the video was taken.

In it, several men are seen holding guns and rifles, speaking Ilocano, a dialect of the Philippines, and then counting down before they start aimlessly shooting their weapons into the air.

The men can be heard in the 39 second video talking about celebrating New Year’s.

Because the men are heard speaking in a Filipino language, it quickly got the attention of the Philippine National Police which announced that they would investigate the matter and prosecute those responsible. However, after an initial investigation, they discovered that the video was shot on Guam. In the background, vehicles are seen bearing Guam license plates.

In fact, Quinit’s Facebook account shows various videos and pictures that appear to be taken on Guam. The PNP later stated that although they do not have jurisdiction on Guam to pursue charges against the people seen in the video, they are coordinating with Interpol to look into the matter.

PNC contacted the Guam Police Department to find out whether or not they are looking into the matter. Acting Spokesperson Paul Tapao says ATF or Alcohol, Tobacco and Firearms is looking into the incident but he could not specify who specifically they are investigating.

You can watch the video below.