This is what over 800 hours of community service gets you… 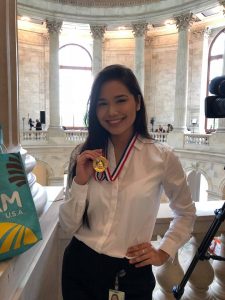 Athena McNinch was recognized by Congress for her work with numerous nonprofit organizations, in volunteering more than 800 hours of community service.

“Athena has gone above and beyond in her service activities,” Bordallo said. “I  am proud of her achievements and look forward to her continuing to give back to our community.”

Last month Athena graduated from University of Guam with a bachelor of criminal justice and public administration. She will enroll in the Master of Public Administration program at UOG in the fall, under the advisement of John Rivera and Ansito Walter.

Athena’s father is the well-known UOG professor Dr. Ron McNinch, of the university’s Jesus and Eugenia Leon Guerrero School of Business and Public  Administration. Her mother is Jolan Rose McNinch, who home-schooled Athena through high school.

Here is the official press release from the Office of Guam Congresswoman Madeleine Z. Bordallo:

Washington, D.C. – Congresswoman Madeleine Z. Bordallo today joined members of House of Representatives and U.S. Senate in recognizing exemplary young adults throughout the country and presenting them with the Congressional Award Gold Medal.

Guam resident Athena McNinch was among this year’s honorees, receiving the Congressional Award’s highest achievement, the Gold Medal. Athena is a recent graduate of the University of Guam where she received her bachelor of criminal justice and public administration this past May 2018. Athena was recognized for her work with numerous non-profit organizations, volunteering over 800 hours of community service. She is a Truman Scholar and is currently interning in Congresswoman Bordallo’s Washington, D.C. office.

The Congressional Award is the U.S. Congress’ award for young Americans and recognizing outstanding achievement in voluntary public service, personal development, physical fitness, and expedition/exploration. This year, Guam was recognized for having the highest number of new Congressional Award participants in the nation, with 80 new youth and young adults signing up to participate.

“The Congressional Award is an opportunity for youth and young adults to become involved in our community and develop skills that will benefit them in the future. I am proud to support the Congressional Award program and recognizing these exemplary individuals for their leadership and service on Guam and throughout our country,” said Congresswoman Bordallo.

“Today, I was pleased to join my colleagues in recognizing Guam’s own Athena McNinch for attaining the Congressional Award’s highest level, the Gold Medal. Athena has gone above and beyond in her service activities. I am proud of her achievements and look forward to her continuing to give back to our community.”