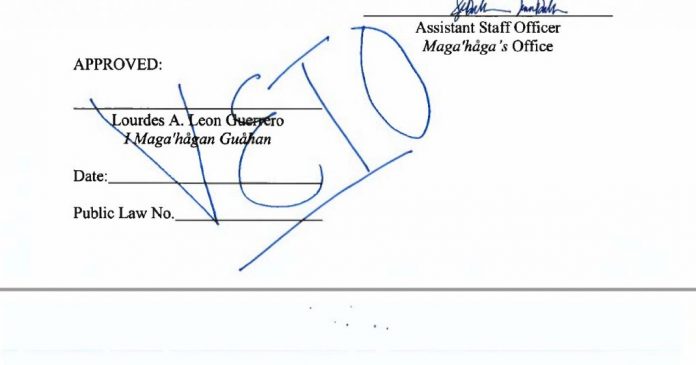 Lawmakers Tuesday morning decided not to override the Gov. Lou Leon Guerrero’s veto of a bill authorizing Municipal Planning Councils to name an acting mayor in the event of a vacancy.

Vice Speaker Telena Nelson called for the override at the start of this morning’s session.

In an emotional plea, Nelson encouraged her peers to “stand their ground and show that we [Senators] are a separate body from the administration.”

Senators Kelly Marsh and Therese Terlaje were the only two senators to join Nelson in voting for the over-ride.

Nelson introduced Bill 259 in an effort to allow a temporary mayor to be named in Yona in the absence of jailed former Mayor Jesse Blas.

Her bill passed unanimously, despite reservations from the legislature’s legal counsel that it might be inorganic.

The governor subsequently vetoed the measure after her own legal counsel agreed with legislative counsel that the bill would have encroached on the appointment power granted to the governor in the Organic Act of Guam.

In a release today, Sen. Jose “Pedo” Terlaje said: “Let the special election happen, let the people of Yona have their say. Put the egos aside and serve the people.”

He voted against the override motion.