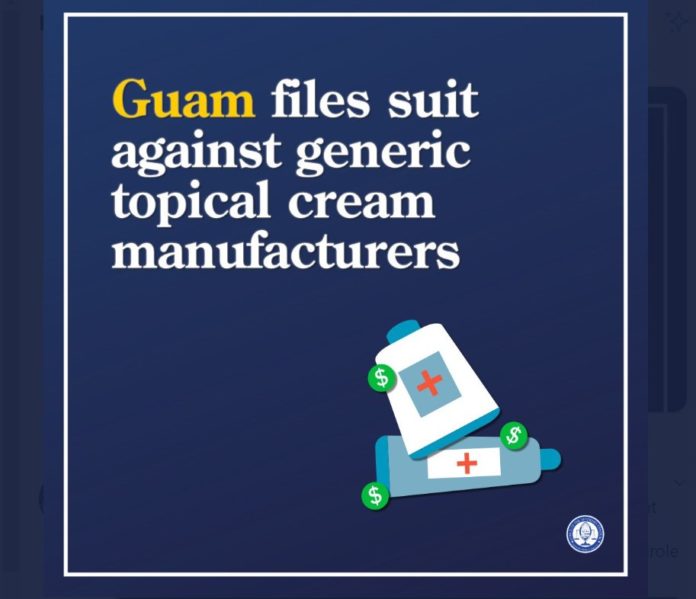 Guam Attorney General Leevin Taitano Camacho has joined a coalition of 51 states and territories led by Connecticut filing a third lawsuit stemming from the ongoing antitrust investigation into a widespread conspiracy by generic drug manufacturers to artificially inflate and manipulate prices, reduce competition, and unreasonably restrain trade for generic drugs sold across the United States.

This new complaint, filed in the U.S. District Court for the District of Connecticut, focuses on 80 topical generic drugs that account for billions of dollars of sales in the United States.

The complaint names 26 corporate defendants and 10 individual defendants in an alleged conspiracy to fix prices and allocate markets for at least 80 generic topical dermatological drugs.

The topical drugs at the center of the complaint include creams, gels, lotions, ointments, shampoos, and solutions used to treat a variety of skin conditions, pain, and allergies. The products are sold by 26 corporate defendants and 10 individual defendants.

“We’ve learned that many of these drugs were sold in Guam,” said Attorney General Camacho. “We will continue to take action against companies who unlawfully harm Guam consumers.”

The lawsuit seeks damages, civil penalties, and actions by the court to restore competition to the generic drug market.

The complaint stems from an ongoing investigation built on evidence from several cooperating witnesses at the core of the conspiracy, a massive document database of over 20 million documents, and a phone records database containing millions of call detail records and contact information for over 600 sales and pricing individuals in the generics industry.

Among the records obtained by the states is a two-volume notebook containing the contemporaneous notes of one of the States’ cooperators that memorialized his discussions during phone calls with competitors and internal company meetings over a period of several years.

The multistate investigation has uncovered comprehensive, direct evidence of unlawful agreements to minimize competition and raise prices on dozens of topical products. The complaint alleges longstanding agreements among manufacturers to ensure a “fair share” of the market for each competitor and to prevent “price erosion” due to competition.

The complaint is the third to be filed in an ongoing, expanding investigation that the Connecticut Office of the Attorney General has referred to as possibly the largest domestic corporate cartel case in the history of the United States.

The second complaint pending in the U.S. District Court in the Eastern District of Pennsylvania was filed in 2019 against Teva Pharmaceuticals and 19 of the nation’s largest generic drug manufacturers.

The complaint names 16 individual senior executive Defendants. The states are currently preparing for trial on that complaint.

Drugs listed in the complaint as subject to price-fixing and market allocation agreements: