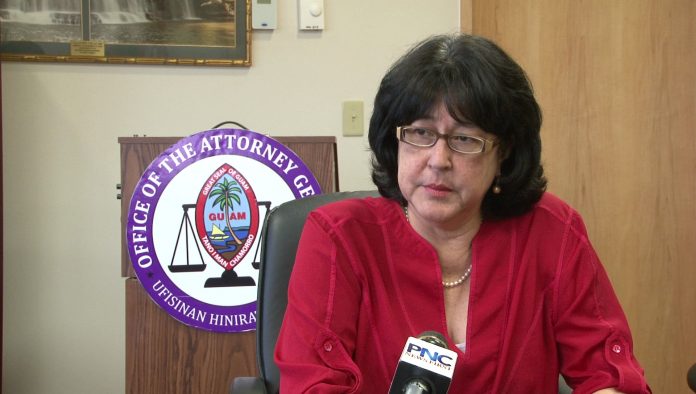 Attorney General Elizabeth Barrett-Anderson filed an entry of appearance on behalf of the Guam Education Board.

Guam – As the chief legal officer of Guam, Attorney General Elizabeth Barrett-Anderson says it is her office’s responsibility to defend any case that’s filed against GovGuam and just as she has in other major cases, the AG says, as an active AG, she may just appear in court to defend the Guam Education Board against Superintendent Jon Fernandez.

“I’m not hesitant to have my name in litigation; I am the attorney general. I’m active in the Layon case. I’m active in the [Department of Corrections] case and in this particular matter, the deputy of our litigation division, who would’ve signed the pleadings, just happens to be on leave right now,” noted Anderson. “In this particular case, because of the crunch in time, it was appropriate for me to go ahead and just sign it.”

Asked whether she would make a physical appearance in court in the case, Anderson said, “I don’t know. If I’m available, I will. If I wanna assign it, I can give it to my deputy, an assistant AG.”

The case began as an allegation against Fernandez of sexual misconduct filed with the GEB in May and culminated with a federal lawsuit after Fernandez’s contract was terminated and an investigation of even more details of alleged wrongdoing leaked and obtained by PNC.

“My knowledge of the case is, a lot of it is what the public knows of the case and so now I’m gonna have to do a lot more review of the last, really six months, I guess. Every action that the board has taken,” she said.

“A recommendation has to be made … to the governor, a request made to my office. I will review it and if I indicate that we should represent those individuals, that recommendation, he has the final say whether this office can represent any employee of the government in their personal capacity,” explained Anderson.

One thing’s for sure, contracted board legal counsel Attorney Gary Gumataotao will remain on the case. Gumataotao last Friday drew the ire of Chief District Court Judge Frances Tydingco-Gatewood in a heated exchange even leading to the judge banging her gavel—only the second time in her 22 years as a judge she’s done so.

“By law, the board counsel is required to be appointed to assist me in the litigation,” explained Anderson. “I did approve the contract for Mr. Gary Gumataotao, so we’ll be working with him as well–get an idea from him. He can advise me as to what’s going on.”

We also asked Anderson whether she would consider a possible settlement in the case.

“No comment,” she immediately responded. “l’m just gonna have to indicate to you, I’m not gonna make any comment at this time. It’s gonna be premature, it’d be ill-advised of me to be guessing or assuming which way this office is gonna go in defending the Guam Education Board, they are our client.”

The AG says they have until December 14 to file their response to Fernandez’s lawsuit.