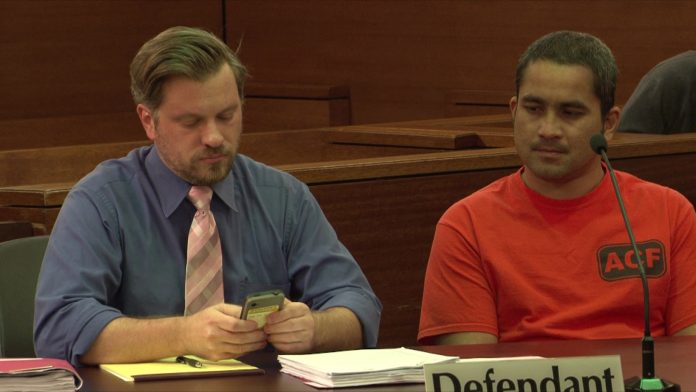 James Corpuz is accused of raping two minors, one who was at least 9-years-old at the time she was raped.

Guam – The attorney for accused child rapist James Corpuz, is again moving to have the charges against his client dismissed while also questioning the need for multiple indictments. The parties were back in court today for a motion hearing.

This is not the first time Attorney John Morrison has made these arguments in front of a judge on behalf of Corpuz. In fact, he’s done it several times.

The first led to the dismissal of rape charges against Corpuz because of a clerical error that violated Corpuz’ speedy trial rights.

A day after Corpuz was released, he was re-indicted on similar charges. Again, Morrison moved to dismiss this new indictment. Then, two weeks later, the Attorney General’s Office, again, charged Corpuz with more rape charges.

“So our position is if [the first case] had to have been dismissed with prejudice, as we view that it should have been, then none of these cases would be able to go forward that are currently pending before these two separate courts. The Supreme Court does not specifically say that a speedy trial violation results in dismissal with prejudice, but our submission is that that’s the only interpretation that makes any sense,” argued Morrison.

“As Mr. Morrison has conceded, there’s nothing in Supreme Court of Guam case law that says that a dismissal or the violation of the speedy trial statute is per se with prejudice,” Assistant Attorney General James Collins countered.

James Corpuz was on the run for several months, wanted on charges that he raped two minors. Under the new indictments, Corpuz is charged with raping both girls for several years, one of them from the time she was 12 and the other as early as 9 years old.

Collins argues that these motions made by the defense have already been decided upon. There’s no need to bring them forward again, he suggests.

“Essentially this motion to dismiss is simply re-litigating the facts that happened there,” he points out. “The trial court, which made that decision and did dismiss this case but dismissed it without prejudice, found specifically on the record that there was no bad faith on the part of the people that led to that dismissal.”

But Attorney Morrison responded: “We’re simply arguing that that whole language, that whole discussion that the Supreme Court engaged in, would make no sense if dismissal without prejudice were the remedy … the government would always be able to bring a case after the running of speedy trial under any circumstance so long as they didn’t operate in bad faith … [it] just wouldn’t make any sense if the end result here is gonna be, ‘The government always wins. The government can always refile.'”