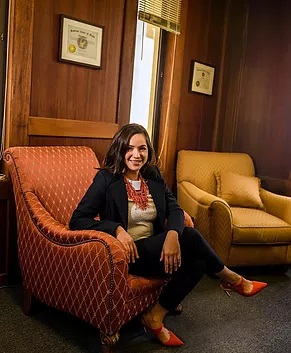 In a public statement regarding her resignation, Attorney Williams clarifies that her opinion is not an official statement from the Democratic Party.

Saying, “…It has come to my attention that others have mischaracterized this as an official position by the Democratic Party. It is not. It is merely my personal observation of candidates who I believe would not support legislation like Bill 291-36.”

In an interview on Newstalk K57 with Patti Arroyo, Chirag Bhojwani— the Executive Director of the Democratic Party of Guam prefaces Attorney Vanessa Williams’ resignation, explaining that Williams posted a list of 12 candidates with their names crossed out in response to who she thinks would join her in advocating “anti-equality legislation.”

Bhokwani said, “…And there were some individuals who didn’t take too kindly to her social media post that she shared with friends and family–that’s what had happened. It was screenshotted and being spread around Whatsapp. It’s Vanessa’s personal opinion. She, just like anybody in this country, who is afforded the First Amendment right? But Vanessa has decided to unfortunately resign so that she can continue to do work that matters to her and honestly, women around the country.”

Guam Democratic Party Chairman Tony Babauta commended Williams on her selfless gesture to step down, especially in light of the overturning of Roe v. Wade.

Bill 291-36, also known as the Guam Heartbeat Act of 2022 bans abortions once a fetal heartbeat is detected.

Williams plans to advoacte for women and children who would suffer from the inactment of this bill.

Saying, “I have resigned as legal counsel from the Democratic Party of Guam so I may focus on continuing to be an advocate for all people who can get pregnant and against this health and equality crisis that plagues our island.”

In a statement for PNC, Williams further explains how she will help the community affected by Bill 291-36.

Saying that, “Women and children in Guam face astonishing rates of domestic violence and sexual assault in Guam, and the greater the access to reproductive healthcare and reproductive freedom, the more likely we are able to reduce that number. For over a decade Guam has consistently ranked among the top in the United States for this shameful statistic. I am going to continue to engage with voters and elected representatives until they acknowledge this reality and take meaningful steps to address this crisis which includes blocking legislation like Bill 291-36 that perpetuates the culture of misogyny that makes us one of the worst places in the country for women, children and people who can get pregnant.”