Guam – A 66 year old woman remains in critical but stable condition at GMH after her Toyota sedan smacked into a concrete power pole off  Route 4 in Ipan Tuesday morning.

The jaws of life had to be used to extract the woman yesterday after the driver’s side of her vehicle smacked into the pole broad-side.

The accident happened shortly after 9am on route 4 in front of Jeff’s Pirate’s cove. The roads were wet from morning rains. Guam Fire Captain Stephan Charfarous said it appears she slipped off the road into the power pole.

It is the latest in a string of accidents at a notorious curve on Route 4 in front of the Ipan restaurant, whose owner, Jeff Pleadwell, called into the Breakfast show this morning.

He says the jaws of life were used to extract the woman. And he urged DPW to do something about this dangers curve. 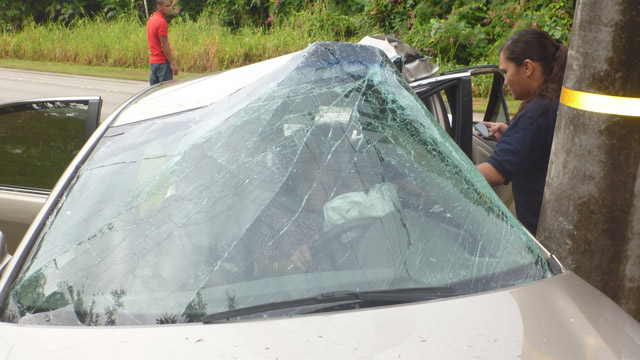