Guam – Accused murderer Keith J. Garrido was caught just over an hour after escaping from a DOC vehicle while being transported to a hearing at the Superior Court this morning.

Garrido was en-route to Court this morning for a hearing to set a date for his trial in the December 2012 murder of  63-year-old Nancy Mafnas.

Department of Corrections Spokesman Lt. Antone Aguon reports that Garrido was caught about 9:30am near the old Songs Auto on Chalan Pago along Route 4. Lt.  Aguon says Garrido escaped at 8:17am by jumping out of a DOC transport van while the vehicle was stopped at the Chalan Pago Maimai traffic light.

GPD Spokesman Officer A.J. Balajadia reports that SWAT, CID, Highway Patrol, the Hagatna Precinct and DOC were all involved in the search for Garrido in the Santa Cruz area. Officer Balajadia says Garrido was apprehended after officers saw him fleeing across Route 4 into the Old Songs Auto. Garrido is in custody and being questioned, he said.

Garrido Not Wearing an Orange DOC Jump Suit When Arrested:

Injury to Woman Believed to Be Linked to Escape:

Diane Strong called the K-57 “Patti on the Radio” program to say that she witnessed a “scantily clad” woman being placed in a police van across from Songs Auto where Garrido was captured. She said the woman was wearing only “panties” and someone had given her a rain coat.

HEAR the interview with Officer A.J. Balajadia and Diane Strong on the “Patti on the Radio” program HERE

Tuesday morning, Balajadia acknowledged that the woman seen by Strong was “injured.” Tuesday afternoon Balajadia said Detectives now believe that the woman’s “injuries” are linked to Garrido’s escaped. He could not say how.

He said the woman is receiving treatment [at Naval Hospital] and Detectives have not yet had a chance to speak with her.

The 21 year old Garrido is accused of murdering 63-year-old Nancy Mafnas in her Barrigada home in December of last year.

Mafnas was found dead in her Toto-Canada home Saturday December 1st, 2012.  The cause of her death was “blunt force trauma.”

Police identified and arrested Garrido as the suspect after someone snapped a photo of  him after he crashed Mafnas’ car into a tree near her house.

[View the Wednesday, December 5th 2012 PNC report on Garrido’s arrest and the Mafnas murder below:] 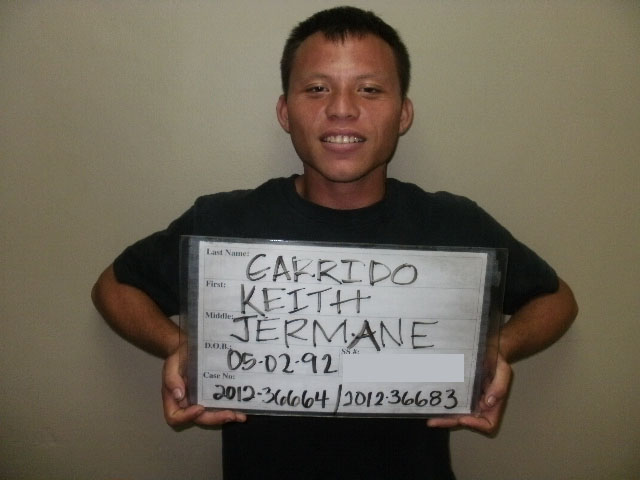