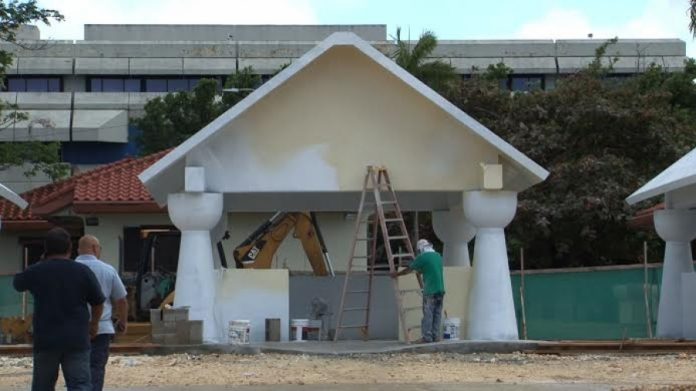 The $2.2 million contract to build 34 cement huts did not undergo attorney general review as required by procurement law, according to the OPA.

Guam – The Office of Public Accountability released its audit of FestPac and on top of procurement issues with their event management contractor, the OPA says the $2.2 million contract for the FestPac huts was also awarded in violation of procurement laws.

With the 12th annual Festival of the Pacific Arts less than a month away, the Office of Public Accountability says FestPac organizers still have many challenges ahead of them.

The audit, issued, today, lists three major findings. The first is a shortfall of about $1.1 million if the FestPac committee fails to obtain additional funding for all its projected expenses.

On the issue of the committee’s event manager, the OPA acknowledged that the Guam Visitors Bureau and the FestPac committee have found a way around procurement concerns, but only after the issue was brought to light.

Initially, the FestPac committee had planned to funnel $4.2 million through their event manager, but after reviewing the procurement contract, the Attorney General’s Office determined that the contract only allowed for a maximum spending of $800,000 without going through an RFP.

But it’s not just procurement concerns with their event manager that were revealed, it turns out that even the contract for the 34 FestPac huts that were built violated procurement law, according to the OPA.

The design-build construction, worth $2.2 million “did not undergo the Attorney General’s review.”

Procurement law requires any contract worth more than $500,000 to undergo AG review. So far, according to the audit, a total of $1.6 million has already been paid to the contractor.

“With less than 30 days, the committee is challenged to deliver a successful FestPac that Guam and her people can be proud of,” the report states, “but the committee must also ensure that it achieves this goal in conformity with Guam laws and regulations. “

The OPA says they plan to conduct a post review of festpac after the festival ends, which will also include a review of fundraising activities.

You can read the report by clicking on the file below.