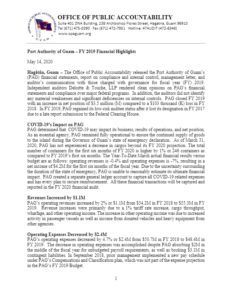 According to an audit released by the Office of Public Accountability, the Port Authority of Guam has determined that COVID-19 may in the months ahead impact its business, the results of operations, and its net position.

However, as of March 31 when this audit was completed, the Port remained fully operational and had not experienced any decrease in arriving cargo “beyond its FY 2020 projection.”

The Year-To-Date March actual financial results versus budget are as follows: operating revenues are -0.4% and operating expenses are -7%, resulting in a net income of $4.2M for the first six months of the fiscal year.

Due to the uncertainty surrounding the duration of the state of emergency, PAG is unable to reasonably estimate its ultimate financial impact.

The Port has created a separate general ledger account to capture all COVID-19 related expenses and has every plan to secure reimbursement.

All these financial transactions will be captured and reported in the FY 2020 financial audit.

PAG’s operating expenses decreased by 4.7% or $2.4M from $50.7M in FY 2018 to $48.4M in FY 2019.  The decrease in operating expenses was accomplished despite PAG absorbing $2M in the middle of the fiscal year for unbudgeted payroll requirements, as well as booking $3.1M in contingent liabilities. In September 2018, prior management implemented a new pay schedule under PAG’s Compensations and Classification plan, which was not part of the expense projection in the PAG’s FY 2019 Budget.

Report on Internal Control and Compliance and Management Letter

PAG received an unmodified opinion on its compliance report over major federal programs and no findings were identified. Similarly, no material weaknesses were identified over financial reporting.

The independent auditors issued a Management Letter that identified a repeat finding on lease agreements.  Specifically, PAG has not finalized recent lease agreements with five tenants.

For a more detailed commentary on PAG’s operations, refer to the Management’s Discussion and Analysis in the audit report. You may also view the reports in their entirety at www.opaguam.org or www.portguam.com.

READ the release from the Port of Guam in FULL below

The following is a summary of financial highlights:

• In FY19, the Port regained its low-risk auditee status after it lost its designation in FY17 due to a late submission to the Federal Clearing House.

• The Port’s total assets and deferred cash inflows increased by 2% from $246 million in FY18 to $251 million in FY19. One of the main reason for the growth was a 10% increase in cash and cash equivalents in FY19.

• A $3.1 million contingency expense was recorded in FY19 to account for the Port’s contingency liabilities for past Civil Service Commission cases. The total amount represents the accumulation of liabilities ranging between 3 to 8 years in employee litigations, wherein these employees prevailed.

• In FY19, the Port was able to accomplish a Debt Service Coverage Ratio (DSCR) of 2.33. The bond indenture requires the authority to maintain a DSCR of 1.25.

“The results of the FY19 audit are not happenstance. The Port went from a deficit of $103K in FY18 to a net income of $3.5M. This net-income is even after absorbing $2M in the middle of the fiscal year for unbudgeted payroll requirements, as well as booking $3.1M in contingent liabilities, said Port General Manager Rory J. Respicio.

“Deputy General Managers Dominic Muna, Louie Baza and I, together with our Board and Gov. Lou Leon Guerrero and Lt. Gov. Josh Tenorio, are grateful to all of the Port’s employees for their hard work, especially during this public health pandemic. We will remain fiscally prudent and operationally efficient while ensuring that the Port’s employees remain the Port’s greatest asset.”