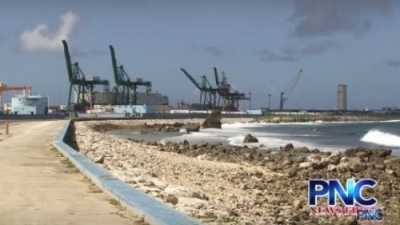 You can read the full audit attached below.

Guam – While the Port Authority increased its net income from the previous fiscal year, a recent audit from the OPA says it was a significant decrease from the prior year’s, additionally, the OPA says although there was no provision for the $14 million dollar and the pending litigation from the Port YTK case, it places an emphasis on the lawsuit going forward.

The Port Authority of Guam received an unmodified clean opinion from auditors Deloitte & Touche Monday. According to the audit, the Port increased its net position by $7.1 million. However, the OPA notes, this is a significant decrease from the prior year’s net income of $62 million. But while the Port looks good for Fiscal Year 2016, Deloitte & Touche put a strong emphasis on pending litigation between the port and Guam YTK Corporation.

Earlier this year, the Port board authorized legal counsel Mike Philips to appeal a recent superior court decision from Judge Anita Sukola back in July of last year that upheld a $14 million arbitration award to Guam YTK from the Port Authority.

Guam YTK, a former port tenant, took the Port to an arbitration panel over a lease agreement dating back to December 2001.

In the audit, Deloitte & Touche stated that there was no provision to include the $14 million yet they did not choose to ignore it either, placing a strong “emphasis” on the pending case.

Additionally, in its management letter, auditors identified several areas of concerns. Among them–lease agreements. Deloitte & Touche list concerns related to the Port Modernization Plan, lack of reconciliation of sales invoices, lack of periodic assessments of allowance for doubtful accounts, management and lease agreements not finalized. Of the concerns listed, three were repeated from last year–management and lease agreements, interest capitalization of qualified assets, and written accounting policies or manual.

This is the 14th fiscal year in a row where the Port Authority has consistently shown an increase in net assets.

And while the Port’s revenues increased so did its operating expenses. Audit papers show an increase of $6.8 million to $44 million–an 18.6 percent increase from the prior fiscal year. The increase was primarily due to increases in management and administration and depreciation of assets.