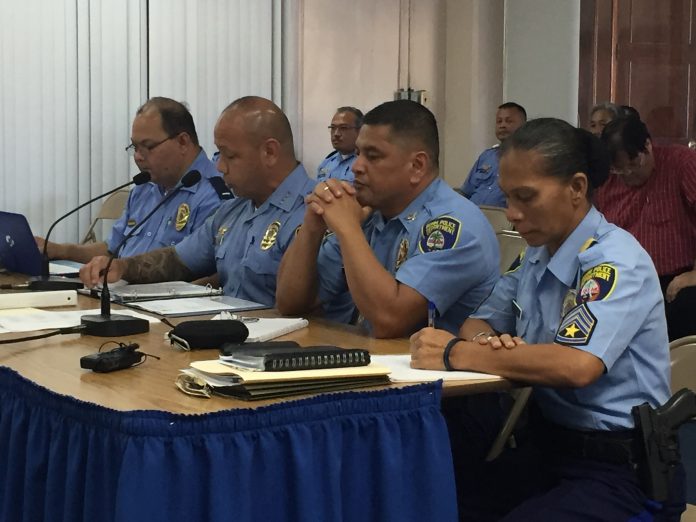 GPD Police Chief says in some aspects of the Police Reservist program, as much as 50 percent of the required courses were not administered.

It took just a few weeks to complete, but now that the results are out on the audit of the 18th Civilian Volunteer Police Reserve cycle, it revealed that there are some serious holes in the police reservist program—serious enough that Guam Police Department Chief of Police Joseph Cruz was forced to pull 23 reservists from the field last month. He testified today at a public hearing on the matter.

“An internal audit of the 18th CVPR Cycle, the most recently trained reserve officer cycle, revealed certification-training concerns that were inconsistent with that which is required by the aforementioned mandates,” Cruz testified.

Cruz says that the most recently cycle of reservists only completed a total of 509 hours of the required 735 contact hours. These hours were broken down into different aspects of the training cycle of which, he says, 45 hours are for essential courses.

Some of those courses that were not administered include first aid, active shooter, Guam criminal law, dealing with physically or mentally challenged individuals, dynamics of substance abuse, and defensive tactics, among other courses. In terms of suitability, such as police, traffic and court clearance, background investigation that includes a polygraph test, driver’s license, firearms ID card, physical and psychological fitness, reading and writing proficiency and drug tests, Cruz says only 70 percent of the those courses were met.

“The completion of the 18th cycle CVPR audit and the objectives we now face in appropriately realizing the required suitability and training needs brings to the forefront GPD’s needs to research previous CVPR training cycles,” said Cruz.

Chief Cruz noted that it may take some time before the 23 most recent graduates can return to the field as an audit of GCC’s program for certifying police reservists must also be completed. In the meantime, some of the recent graduates are performing other roles within the department such as police escorts and dispatchers.

Vice Speaker BJ Cruz pointed out that if one audit revealed some serious flaws in one particular cycle, other cycles could be affected as well. He asked Chief Cruz whether other cycles would be audited as well.

“Absolutely. Vice Speaker, the results of this audit has led us in being–comprehensive, we are taking a look at the entire program. We are considering that there’s a need to look at all the cycles before that just to make sure that we are doing our part, just to make sure that all our police reservists are meeting that same standard,” he noted.