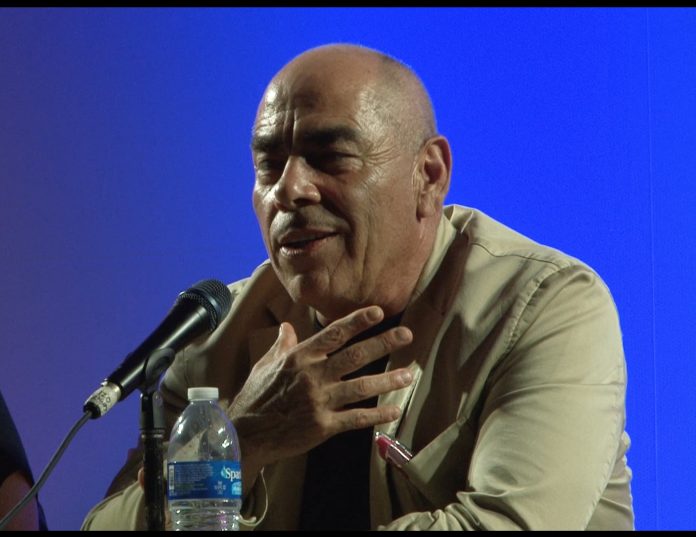 Guam Humanities Council will sponsor one more screening of the inspiring film, “A Place to Stand.”

Guam – One of the country’s greatest living poet’s returned to Guam to inspire at-risk youth, encourage artistry with an indigenous voice, and premier a film about his life.  PNC went to Southern High School Thursday night to see how residents are reacting to his biopic “A Place to Stand.”

Jimmy Santiago Baca is back on Guam with filmmaker Daniel Glick, in part to premier their collaborative work “A Place to Stand” — the documentary of Baca’s life based on his memoir with the same name.  The Guam Humanities Council arranged for this visit, which also saw the artists tour J.P. Torres Alternative School, the Department of Youth Affairs, the Department of Corrections, and the University of Guam.  His extraordinary life is both inspiring and haunting, and reveals the challenges and troubles with the United States’ criminal justice system.

“I wanted the film to be in places like this, with kids like this — so you could think that anything is possible, and not just be a weekend hit at the box office and go away.  I wanted it to reach people like you — kids like you.  Because I was like you,” Baca told the screening audience.

Baca has led an incredible life.  Abandoned by his parents, growing up in an orphanage, living on the streets — his early years weren’t kind.  And at twenty-one, functionally illiterate, Baca found himself in jail for drug possession at one of the most violent prisons in America.  And while prison can seem like the end of the road for some, Baca used his time to reflect; saying while being behind bars isn’t a great place to be, there’s no greater place to find yourself.  He started writing poems.  Fellow inmates encouraged and commissioned his work.  And while still incarcerated, Baca became a published author.

“I learned to cry when I was 31.  I had never cried before [because] I was told men don’t cry,” Baca assured the young man.  “I was with my two older sons on the highway.  And I don’t know what happened; I just heard a song on the radio or something.  Thirty-one years old, been shot, been stabbed, done everything, defied everybody, hated all the system, everything — and I pull over on the road and I start crying.  My oldest son, bless his heart, freaked out — freaked out.  He jumped in the front grabbed me, and goes, ‘Pa, you okay?  You having a hard time?’ I’m like, ‘No man, I’m crying!’”

It’s the common ground we have that motivated Baca to come to Guam, saying while he arguably should be in New York City or Los Angeles right now, “The reason I’m here is because there’s a connection between you and me.  And that connection is that we are people — we belong to the true tribe of truth.  We have truth.  And that’s a lot more than they have in New York or L.A.”

A gala dinner and film screening will be held at the Westin Resort Saturday night at 6 p.m.  Tickets are $150 and will benefit GHC.