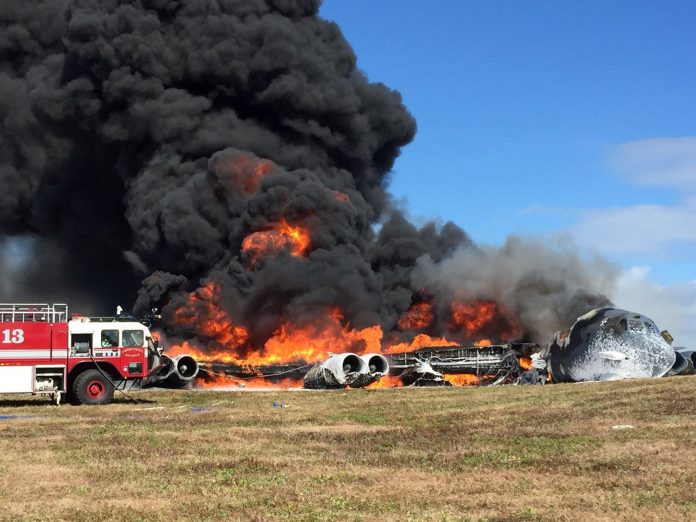 “Because of their quick thinking and good judgement in this emergency situation, the aircrew not only saved their lives but averted a more catastrophic incident.” – said Brig. Gen. DouglasCox, 36th Wing Commander.

Guam – A B-52 crashed early this morning and caught fire at Andersen Air Force Base.

According to a release from AAFB, a B-52H Stratofortress crashed at approximately 8:30 a.m. on the Andersen flight line. All seven aircrew members have safely egressed the aircraft. No injuries have been reported.

Also stated in the release, the B-52 was deployed to Andersen AFB from Minot, North Dakota, as part of the DoD’s continuous bomber presence mission in the Pacific. The aircrew are members from the 69th Expeditionary Bomb Squadron and were performing a routine training mission.

The incident is under investigation and measures to mitigate possible environmental impacts are being taken.

According to a release from the Guam Fire Department, the Government of Guam also helped in responding to the incident. The release states “The military is setting up an incident command center and they have engaged our government for help. We assure the public this does not appear to be an attack, and we highly discourage anyone from spreading assumptions, or any information that does not come from civil defense or the military itself.”

More information will be released as it becomes available.

READ FULL RELEASE FROM ANDERSEN AIRFORCE BASE BELOW:

The seven aircrew members aboard are safe and no injuries have beenreported.

“We are thankful that the aircrew are safe,” said Brig. Gen. DouglasCox, 36th Wing Commander.  “Because of their quick thinking and good judgement in this emergency situation, the aircrew not only  saved their lives but averted a more catastrophic incident.”

Responding to the incident was a joint effort as emergency responsepersonnel from Andersen, Navy Base Guam, Joint Region Marianasand Government of Guam promptly established a cordon andextinguished the flames.

“Our personnel regularly train to respond to crises like the one we experienced today,” said Cox.  “We’re also grateful for the supportfrom our Government of Guam and U.S. Navy partners inaddressing this serious incident.”

Andersen environmental specialists are assessing any potentialimpacts that may have resulted from leaked fluids or burningaircraft materials to prevent damage to the ecosystem.

The aircraft was carrying inert munitions at the time and posed nodanger to the local community.