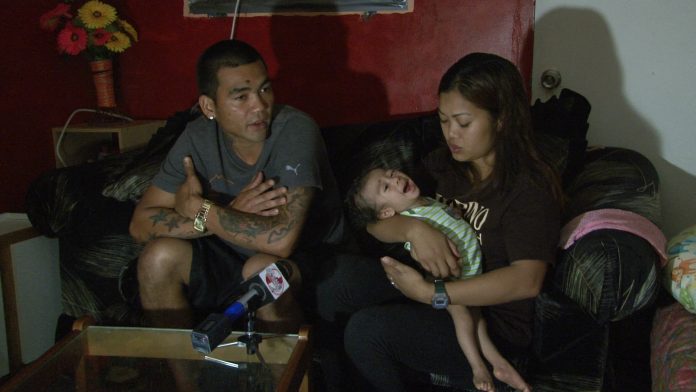 If you would like to help Baby Javen, you can donate to his gofundme account at https://www.gofundme.com/43knssc4.

Guam – A family is seeking help for their one year old son who suffers from a debilitating and rare condition called infantile spasms which causes seizures multiple times a day.

They’ve tried all sorts of medications and diets for their son Baby Javen, but the one treatment that could help is not available on Guam.

“We told the doctors that he wasn’t, his eyes weren’t opening, his jaundice was high,” Pizarro says of the day his son was born. “When [they] take his blood, he wouldn’t even move. So they still released him. But two days after I noticed that this is not normal so we took him back to the hospital and they said that he was dehydrated, his jaundice was high and he had a minor stroke.”

Barely a week old and Javen was already on life support, unable to breathe on his own. Doctors discovered that Javen had multiple blood clots in his brain.

“So the doctors gave him the blood thinner and stuff. Now there’s no more but it did cause minor damage to the brain. So that’s what causes him to have his spasms,” Pizarro says.

At just a little over a month old, Baby Javen was diagnosed with infantile spasms, a rare disorder that causes epilepsy like seizures in infants and children. Each seizure can last just a few seconds or go on for a few minutes and typically occur in a series or an episode. Javen can have a hundred spasms or 20 episodes in one day, says mom Mary Ann Bucala.

Mom and Dad say they’ve tried all sorts of medications and diets and have figured out which ones help and which ones make him worse. But the one treatment their neurologist recommends that’s shown promising results is not available on Guam.

“[Pediatric Neurologist] Dr. Ramel Carlos mentioned something about the ketogenic diet. It’s all high fats so we wanna try that out. That’s why we’re going to Philippines. Hopefully it works for him,” says Pizarro.

Research has shown that for some babies who’ve undergone the ketogenic diet, the seizures disappeared completely, for others, it’s reduced the severity.

We asked the parents to describe what this has been like for her and her family.

“We see other family members. I always tell my friends, take good care of your kids. I can’t even see that, what they do, they walk around, they smile and stuff,” says Pizarro.

“But him, he’s still like, we don’t know what he’s been through, how he feels. We’re like–I’m just wishing that I can take all his pain,” says Bucala.

PNC: “What’s the one thing that’s getting you guys through all of this?”

“Just him being here. Just seeing him every day, even if he’s struggling. All the kids out there, they struggle. We’re never gonna give up on him,” says Pizarro.

If you would like to help Baby Javen, you can send donations to their go fund me account at https://www.gofundme.com/43knssc4.

You can also drop off cash or check donations at Java Hut Coffee Shop in Tamuning. Checks should be made payable to Mary Ann Bucala. You can call Java Hut at 647-JAVA.