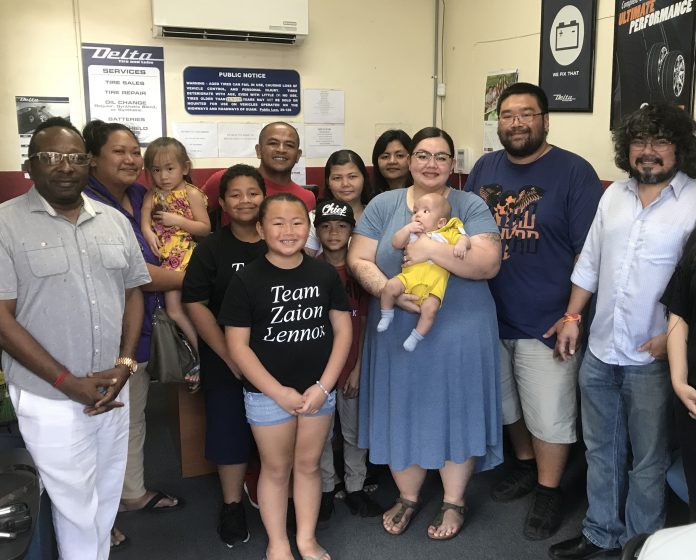 Guam – This is a story that proves our community is a giving community always willing to help those in need. Baby Zaion was born with a host of neurological conditions and was at one point unable to return home to Guam with his family because of financial issues. After airing a story about the family’s urgent plea for help, one local business stepped up to the challenge and has now raised thousands of dollars to help Baby Zaion come home.

Last month we reported the plight of Baby Zaion Cruz who was born with a host of neurological conditions that prevented him from being born in Guam. Born in the Philippines to give him a fighting chance at life, Baby Zaion survived past doctors’ predictions—a true miracle indeed. But medical bills and the inability to pay nearly stranded him and his family.

Immediately after catching our story about Baby Zaion on TV on October 31, one local businessman was so touched that he sprang into action. Delta Tire and Lube President Deepak Dewan tells us what inspired him to reach out and help.

“Family, basically. Family inspired me that half of the family was in Guam the other half was in the Philippines dealing with a medical situation and I was inspired and heartbroken at the same time but I wanted to see what we could do to help,” explains Dewan.

Dewan launched a promotion to raise money for Baby Zaion to come home. Every Saturday in November, Dewan dedicated all sales proceeds from car wash and detailing services at all Delta locations to go toward the family. And because of the promotion’s popularity and success, he even extended it by another week.

And some good news, Baby Zaion is now home! A few days after being discharged from the hospital, St. Luke’s Medical Center and Zaion’s private doctors agreed to allow the family to return home so long as they provided some form of collateral and signed a promissory note. Their bills, however, remain unpaid.

And for the first time, Baby Zaion met his fan, Mr. Dewan at the Ypao Road Delta location on Saturday.

“We wouldn’t have been here today but because of your kind heart, we are. From my family, Team Zaion, we are very, very grateful for the Delta family,” Jennifer said as she handed Dewan a framed photograph of Zaion with the words “THANK YOU DELTA FAMILY, FROM TEAM ZAION LENNOX.”

We also spoke to Zaion’s big brother and sisters who were so happy to finally meet their baby brother.

“It was a happy moment because I never knew my mom would come home,” shared Zyani, noting that her mother and father surprised the family by not telling anyone that they would be coming home. “But then when I saw their face tears came down my eyes,” she added, as she began to cry. “God [brought] us together.”

Through Deepak Dewan and Delta’s fundraising efforts and the generous donations of the community, Delta was able to raise $7,420.