At last night’s Education Board meeting, Board members were disappointed that Board Members were not invited to attend today’s meeting, but that was so that stake holders could candidly talk about each of their respective priorities. At today’s meeting, in the absence of board Chairman Mark Mendiola, board member James Lujan was present at the discussion table and also joined the superintendent and education adviser in a tour of the Charter School led by Dr.Won Pat.

The meeting was in response to a letter from Governor Calvo about a month ago, which had instructed GDOE to vacate building E, in order for the cramped charter school to expand their operations.

During the tour, it was made apparent that building C and D, were not sufficient to sustain the population of the Charter school. A small 8×10 office was being shared by all their teachers and teachers aides, a staff restroom doubled as a storage room, a broken down bus has also been retrofitted to serve as a storage facility. The charter school had also resorted to using temporary containers, which served as classrooms. To add to that, 2 counselors and a cafeteria clerk share an office. If a student needed counseling, the clerk and 1 counselor would have to leave the room, or the student and counselor would grab chairs and sit outside the school in order to maintain the privacy of a counseling session.

Separating the hallway of the GACS facility from the coveted building E is, a chain-link fence. As the governor attempted a month ago, the easy fix would be to simply terminate GDOE’s right to use Building E and allow GACS to move in. But as we learned today, that may not be so simple.

According to Leon Guerrero, the law is very detailed and prescriptive. The Government of Guam is the owner and the beneficiary is #1 the Guam Department of Education included affiliated offices and #2 is the charter schools. “The law says make these facilities available and here is your prioritization. The context of the letter being written was in preparation for a smooth transition and we did not want lingering things left on the table.”

When GDOE received the notice to vacate, GDOE Superintendent Jon Fernandez had written to the Governor, to reconsider. Today, PNC spoke to Fernandez, who by law has the first-right to use the building, he highlighted the importance of having a candid discussion to highlight the needs of each entity.

As Fernandez went through the school, he noted how GACS was in dire need to use Building E. “I think its clear, I don’t think there’s a question here that it is a cramped facility that they are trying to address and she’s (Dr. Won Pat) been a very strong advocate for her school.”

At the end of the day, it was apparent that all parties present, were supportive of students and education. While Fernandez agrees with Won Pat, that GACS would be able to put building E to good use, the law-of-the-land, clearly outlines that first right of use, goes to GDOE. In the meantime, Fernandez is working to address two critical needs of his department.

With the new 3 story 83,000 sq foot HQ that GDOE has, that building is frequently used to conduct training. With central staff performing day-to-day operations, and an influx of non-central GDOE staff, there is just no space to park. In addition to that, GDOE Special Education buses take up a lot of space. Fernandez states that he is currently working on acquiring a dirt-lot behind the Tiyan HQ and that may serve as a temporary solution.

Another critical need for GDOE at building E is the Facilities and Maintanance division, who’s administrative staff is being based at the coveted Tiyan Building. Fernandez and Leon Guerrero are exploring other options to determine a new home for that division.

It was news to both Fernandez and Leon Guerrero today, when they found out that GACS was only seeking temporary usage of building E. GACS is in the process of finding a permanent home, and the expansion to building E is only for a short while.

In the meantime, the three parties concluded that they will submit the required letters, and find alternative solutions to address the status quo. 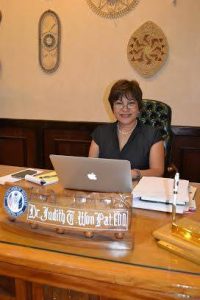 “What I was trying to impress upon them, It’s our children that I am looking after first. I am not asking for office space for our administrative offices, its strictly for the needs of our school children.”

The Governor’s Education Adviser and GDOE superintendent highlighted that GACS had made significant strides since Dr. Won Pat and Mr. Wilfred Aflague came on board at GACS. Chirag Bhojwani, PNC News.