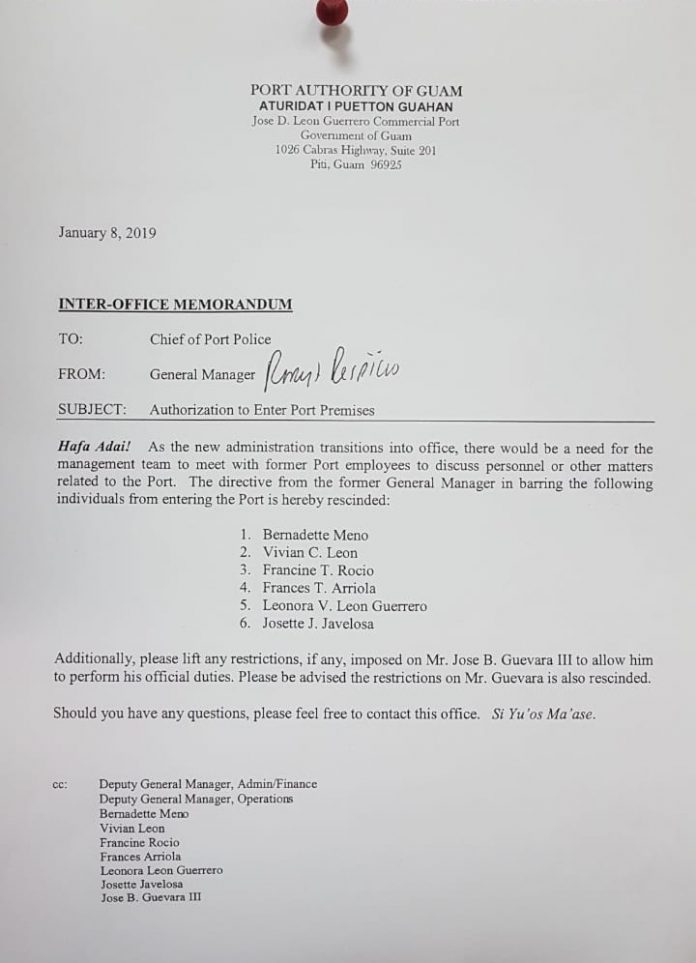 Guam – A wall has been broken down! Closing out his first month at the helm, Port General Manager Rory Respicio, has lifted the ban on the Port 7 employees which restricted them from entering Port premises.

The memorandum puts the Chief of Port Police on notice that from here on out the following individuals have authorization to enter Port premises:

This as part of his decision to probe into the December 2012 Port 7 termination case. A decision which brought scathing words from his predecessor Joanne Brown. Sticking to his word Respicio’s task force is digging into the six year old case.

The memorandum states, “as the new administration transitions into office, there would be a need for the management team to meet with former Port employees to discuss personnel or other matters related to the Port, continuing that the directive from the former general manager in barring these [sic] individuals is here by rescinded.”

But that’s not all, for Jose Guevara, Respicio lifted any restrictions that may have been imposed which restricted him for performing his official duties.

“Also the ban what I spoke to Mr. Jojo Guevara, he was Supreme Court ordered to be re-instated by the court. Well it took some back and forth but he was finally re-instated his back pay is still an issue, but he wasn’t given his certification authority back that’s one of the things we did,” shared Respicio.

The Port 7 was a highly politicized case involving former Port Marketing Manager Bernadette Sterne Meno and six other employees who were fired for allegedly falsifying Meno’s worker’s compensation documents after she suffered a fall at the Port bathroom. Meno and other political allies believed their terminations were politically motivated.

For many of the seven, despite making its rounds through the Civil Service Commission and the local courts, their cases remain unresolved six years later.

“What we discovered is how can one person just make the decision to issue a to a public building there was no court orders for these employees like stay away orders or anything of that nature so I didn’t even know for other than making a commitment that everything is going to run through this task force. And if Deputy General Manager Connie Shinohara needs access to these employees to have conversations with them and individuals and it needs to be done on Port property,” explained Respicio.

It appears that lifting the ban is the first step in the probe which has former GM Joanne Brown fascinated that this is Respicio’s priority right out the gate.

“You know I am fascinated that Rory’s focus in his few weeks as Port General Manager and this is the highlight of his administration so far at the Port. If you recall Patti and of course all of these things are on record. Having them back in the port engaging with fellow employees and having access to resources would have been a concern to us because of the allegations that we had against them and the reasons under why they were terminated you’re not going to want them to have access to the port or to the personnel that are there at least not on port property,” justified Brown.