Guam – Two suspects remain at large in the armed robbery of the Bank of Guam in Yigo this morning. Guam Police Department and agents with the FBI went on a manhunt for the two suspects who fled on foot in the jungle area toward Perez Acres.

GPD Spokesman Officer AJ Balajadia says both men were wearing masks when they held up the bank at gun point.

Police were led on a wild man hunt this afternoon in and out of jungle areas in Yigo near the Bank of Guam. It was just before 10:30 am when two men, brandishing handguns walked into the Bank of Guam, demanding cash from tellers, according to Guam Police Spokesman Officer AJ Balajadia.

Police still don’t know how much cash the men got away with. No injuries were reported.

As PNC arrived at the scene, detectives and police officers began jumping into their marked and unmarked vehicles and dispersed out into different directions evidently searching for the suspects after receiving a tip.

We followed them as they drove into dirt roads in the nearby jungles. After following them in three different directions with no sign of the suspects, our PNC news team headed back to the Bank of Guam.

And even two hours after the armed robbery bank customers continued to pull in, apparently unaware that a robbery had just occurred.

At the time of the robbery, it appeared as though there weren’t any nearby establishments that were open. The bank employees were also ordered to stay inside the building. None of them would speak to the media.

Across the street we approached some utility employees who were working on underground lines around the time that the robbery happened. Although they had no idea that a robbery occurred, they did tell PNC that they heard the sound of a speeding car earlier that morning around the same time as the robbery. They declined to go on camera. But they said that it was a truck, rusty brown in color, that turned right out of Chalan Lujuna and headed north on Route 1.

However, they noted that it didn’t appear suspicious.

Meanwhile, Officer Balajadia says GPD does not anticipate releasing any surveillance footage of the suspects at this time. And the manhunt will continue until these suspects are caught.

As of news time Guam Police have not arrested any suspects involved in the armed robbery. If you have any information that may lead to the arrest of these suspects, you are asked to contact the Guam Police immediately or the Guam Crime Stoppers at 477-HELP, or the Federal Bureau of Investigations at 472-7465.

The suspects are considered armed and dangerous and GPD advises residents not to approach or engage the suspects if you are to come across them.

YIGO – Thursday, February 06, 2014, 10:31am, the Guam Police Department received a call of a reported Robbery at the Yigo Bank of Guam.

It was reported that two masked men with hand guns entered the Yigo Bank of Guam and demanded cash.

Both suspects fled on foot towards Perez Acres, Yigo with an undetermined amount of cash.

We received no reports of injuries.

These suspects should be considered armed and dangerous.  Do not approach, contact the Guam Police Department immediately.

If anyone has information please call Guam Crime Stoppers, The Guam Police Department 475-8615-17 or the Federal Bureau of Investigations at 472-7465

We caution businesses / banks to use added security measures when opening/closing their businesses, be aware of the individuals entering your business. Report any suspicious activity until these suspects are in custody.

This case is a joint investigation between the Guam Police Department and the Federal Bureau of Investigation. 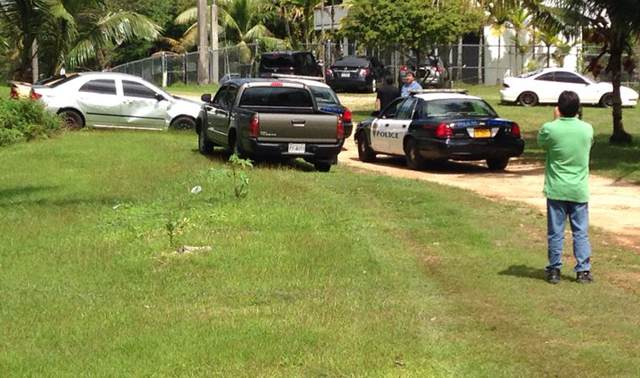