CAMP PHOENIX, Afghanistan — The Soldiers of Task Force Guam received support once again from one of their island’s longest-running businesses.

Guam Army National Guardsmen stationed at nearly a dozen locations in Afghanistan received children’s artwork courtesy of Bank of Guam, one of Guam’s oldest institutions, and cooperation from the Guam National Guard’s Family Programs Office. Hundreds of drawings reached the Soldiers serving Operation Enduring Freedom and majority is displayed on office walls, billeting rooms and even inside tactical vehicles.

“Our Family Readiness Groups (FRGs) and Family Programs Office (FPO) worked together, reaching out to the community,” stated Sharleen R. Perez, Guam Family Readiness Support Assistant. “The results were amazing; many children participated and provided personal touches on their artwork. Their projects will be given to our deployed Soldiers.”

According to Perez, Bank of Guam reached out to the Family Programs Office and wanted to do something special for our deployed service members. The financial institution received a $1,500 grant from the Armed Forces Financial Network (AFFN) and wanted to work with the Guam Guard’s Family Readiness Groups to see how it can have children provide artwork for those deployed.

Bank of Guam named this project Hu Hahasso Hao, which means “Thinking of You,” themed appropriately for the Guam Army National Guard’s 1st Battalion, 294th Infantry Regiment. Approximately 600 Soldiers are wrapping up their OEF mission and will return home in a matter of weeks.

“We appreciate the cooperation of the Guam National Guard Family Programs Office, Bank of Guam and the children who took the time to provide these drawings,” said Capt. Joey San Nicolas, Echo Company commander. “The Soldiers enjoy the artwork. Our office is decorated with them. They bring a touch of home to our area of operations.” 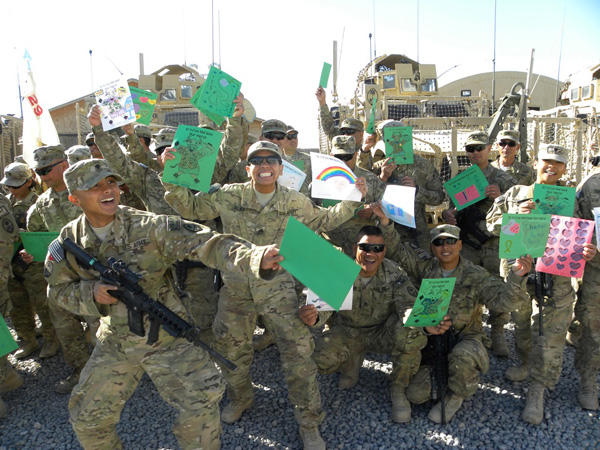 “While working with Bank of Guam, we came up with a venue (Hagatna Shopping Center) that will be open to everyone to take part of the project,” Perez added. “The young participants were able to submit their artwork and receive a prize from Bank of Guam. How could they resist the free “yellow ribbon” face painting!
We also had children interact with rear detachment Soldiers. These Soldiers were able to talk about their jobs and responsibilities in the military.”

“Everyone appreciates the support we get from our community. This is an example of the tremendous assistance that has helped our Soldiers throughout this deployment,” said Lt. Col. Michael Tougher, Task Force Guam commander. “It’s very meaningful because the artwork came from our children. Everyone’s touched by this.” 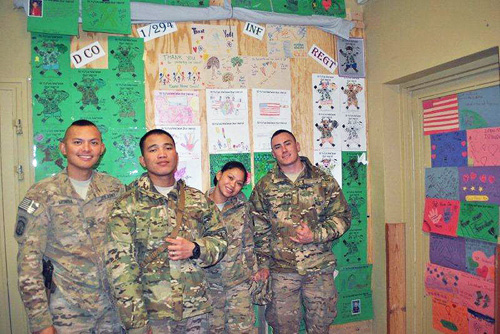 “Island unity” is how Capt. Romeo Sanchez described the community effort. Sanchez, Delta Company commander at Camp Stone, Herat province, said, “This is something very special for the Soldiers in Afghanistan. Children put their personal touches on these works of art. These were dedicated to us and we really appreciate the efforts of everyone involved.”

“The event was an overall success. Bank of Guam looks forward to working with us again,” Perez said. “We can’t wait to see what else we will be doing for our military. When deployed service members receive this artwork, we know they’ll take the time to appreciate the wonderful work done by the many little hands. They know that it may be a small gesture of appreciation, however they appreciate our military with their big hearts!”

The Family Readiness Support Assistant (FRSA) program mission statement is “To empower commanders in their duty to deliver the Total Army Family Program (AR 600-20) so that Soldiers and families are entitled, informed, educated, assisted, and made ready for the unique demands of military life before, during, and after deployment.” 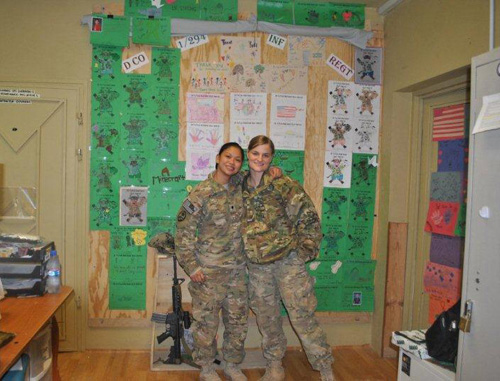