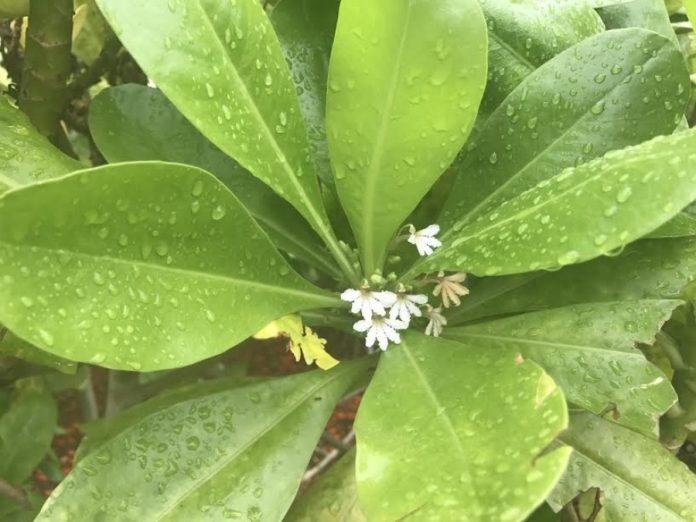 UOG entomologist now unsure of exact cause of nanasu death.

Guam – The bark beetle might not be to blame for the dying native Nanasu plants in Tumon.

According to a release from the University of Guam the sample beetles that were sent to a University of Florida lab for examination have been identified as hemicryphalus argutus. Almost nothing is known about this species and it has never been recorded on Guam. However, UOG entomologist Dr. Aubrey Moore believes it is not an invasive species. Dr. Moore is now unsure of the exact culprit behind the dying Nanasu plants

Working with the University of Guam, experts at the University of Florida have identified the tiny bark beetle which is attacking Guam’s nanåsu plants, also known as beach naupaka or by its scientific name, Scaevola taccada. Nanåsu is a major component of the beach strand community on Pacific Islands where it is also used as an ornamental landscaping plant. Ironically, this same plant species is considered to be an invasive species in Florida and the Caribbean (CABI 2017).

A few weeks ago Ilene Quitugua, a contractor who monitors the health of landscape plants for the Guam Visitor’s Bureau (GVB) and Denson Fairfield, Landscape Management Systems, a company that maintains landscapes for GVB, noticed that nanåsu plants used in ornamental hedges throughout Tumon Bay were starting to die.

The University of Guam College of Natural and Applied Sciences Extension and Outreach (UOG-CNAS-EO) was contacted and asked to investigate the cause of the problem and make recommendations for solving it. UOG-CNAS-EO extension agent Phoebe Wall and UOG-CNAS-EO entomologist Dr. Aubrey Moore collected plant samples. When dead and dying branches were cut open and examined under a microscope, Moore found many minute bark beetles feeding inside. Images were taken and sent to Dr. Jiri Hulcr at the University of Florida who is a world expert on bark beetles. Dr. Hulcr kindly offered to help identify the beetles and asked for specimens to be sent to him. Getting the scientific name for a pest unlocks the global knowledge base for that species. This allows us to answer questions such as:

Accurate identification of insect pests is very important and far more difficult than most people expect. Species determination is usually performed by highly skilled taxonomists who specialize in a relatively small group of species. Bark beetles are among the hardest insects to identify. They belong to a family of beetles called Curculionidae, which contains more than 86,000 species and many more yet to be described.

Specimens from Guam arrived at the University of Florida this week and were identified as Hemicryphalus argutus by Andrew Johnson, a graduate student working in Hulcr’s lab. Johnson is the world’s leading taxonomist in a huge group of tiny bark beetles known as Cryphalini, or the pygmy borers. Almost nothing is known about this species. The only previous record is from specimens collected on Saipan during 1944 and 1945 (Wood 1960).

Although this is the first time H. argutus has been observed on Guam, it is probably not an invasive species. Moore thinks it is likely that this is an endemic species, meaning that it evolved on Guam and other Mariana Islands. So why are we seeing what is becoming known as Scaevola dieback? One possible cause to be investigated is plant pathogens. Many species of bark beetles related to H. argutus infect plants with fungus on which they feed. It is the fungus that actually kills the plant, not the tiny beetles.

Or, we may have the wrong suspect. The plot thickens as the Scaevola dieback investigation proceeds.