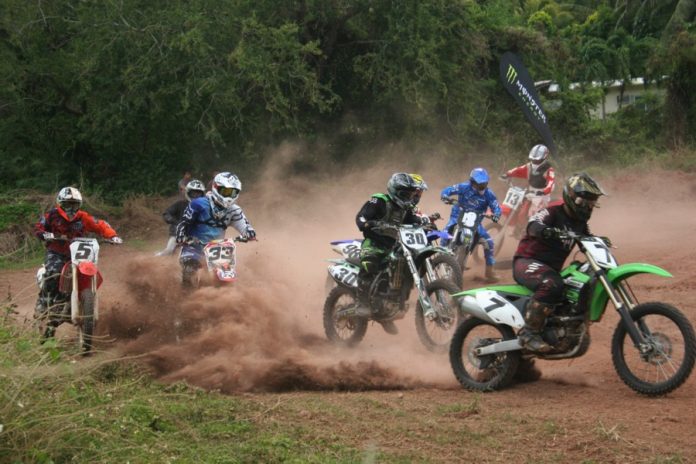 Umatac, Guam- For the past two Sundays round 1 and 2 of the 2013 Monster Energy Guam Motocross Championships have kept the residents of Umatac and their Discovery Day celebration guests overwhelmed with the roars and rumbles from a large contingent of high flying race machines.

With the sun out and cool offshore breezes, the racers, along with fans, had ideal but at times very dusty conditions with the racing action kicking off at noon on both Sundays with full of open throttle carnage.

In the Open Motorcycle class former Guam champion Caleb Barretto, along with the current reigning champ JR Cepeda, dominated each rounds events respectively with several other hard charging riders getting into the mix.

Round 1 saw #99 Caleb Barretto, aboard his Suzuki supported by Cycles Plus, take an early lead that he would hold all the way to the finish. Barretto was followed by #33 Jake Jones aboard a Triple J supported Honda in second and JR Cepeda aboard the #1 Kawasaki supported by Johnston Supplies in third. The following Sunday, round 2, saw the #1 of JR Cepeda take the win with Barretto taking second and #17 Jonathan Lizama aboard a Kawasaki placing third.

After two rounds in Umatac a Discovery Day champion had been determined by combining the results from both Sundays rounds of racing. Caleb Barretto takes the Umatac Discovery Day Open Motorcycle class championship with Cepeda taking second and Jake Jones placing third.

With two of the twelve rounds completed Barretto now sits in first place in the standings for the 2013 Monster Energy Guam Motocross Championships with 94 points. JR Cepeda holds second in the standings with 90 points and Jake Jones sits on third with 80 points.

#55 Shawn Aguilo pulling double duty racing both in the Open Motorcycle class placing sixth overall and in the Open Atv class showed his ability to run up front in both classes. At round 1 Aguilo took the win aboard a Kawasaki 450 four wheeler with #88 Ray Manibusan on a Yamaha taking second. Third place went to the #5 Bobcat Guam supported Honda of Marcus Guerrero Jr.. At round 2 Aguilo was out with a mechanical opening the door to a host of prospective chargers. #22 Travis Joaquin after a long hiatus from competition took the round 2 win with Manibusan placing second and the Cycles Plus Suzuki racer #1 Robert Bucek squeaking into third.

#17 Rowen Pereira took the overall Discovery Day championships for the Open Kids Minibike class aboard his Honda with #29 Yamaha mounted Ethan Camacho taking second and Ethan Manibusan in third aboard his #111 Honda.

#29 Ethan Camacho took the 85cc Kids Minibike Discovery Day championship with #111 Ethan Manibusan in second and #77 Rollin Pereira in third on his Kawasaki.

A fierce battle and a high light of the weekend were the Kids Mini Atv class races which saw intense wheel to wheel action. Battling up front was the Kids Open Mini Atv class reigning champ #1 Janissa Torres aboard a Torres Racing Apex and #6 Collin Ray Cruz on his DRX. The two young racers went side to side as they pulled away from the rest of the field of competitors. Torres took the win in round 1 with Cruz blazing back in spectacular fashion to take the following Sundays round 2.Taking the Umatac Discovery Day championship was Collin Ray Cruz with Janissa Torres second and #13 Bernabe Guerrero on the GTR supported DRX in third.

Round 3 of the 12 round 2013 Monster energy Guam Motocross Championships will take place this coming Sunday March 17th to be held at the Guam International Raceway in Yigo. The racing starts at 1pm with the admission being free to come out and watch. Special thank you to the people, of the village of Umatac, the Umatac Mayors council, and the to Mayor Quinata for their generous hospitality. Also a special thank you to Bobcat Guam, Pine Rental,  GTR Motorsports, Cycles Plus, RPM Yamaha, Hawaiian Rock, Smithbridge, DCK, Simpson family, and to all the GIRMAC volunteers for all their support.