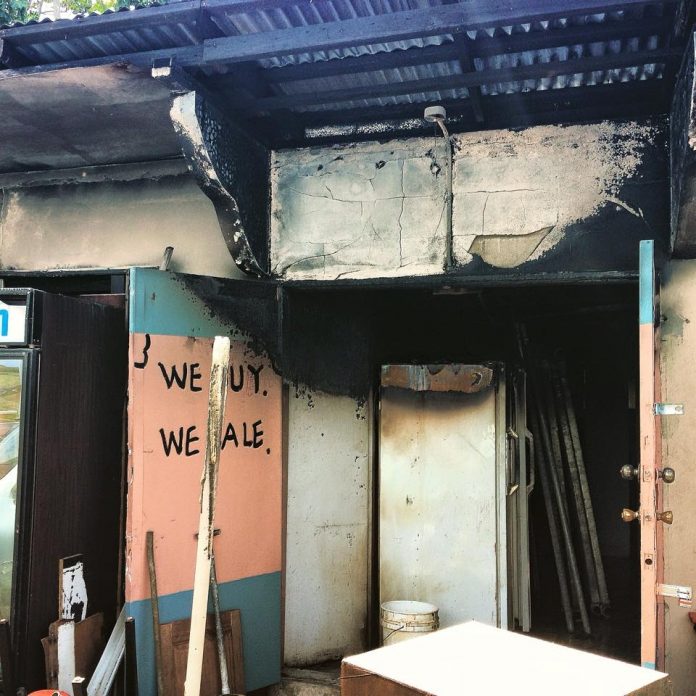 A surplus store in Barrigada that was engulfed in flames last night caused panic and traffic delays to residents around the area.

A Barrigada man has lost his store along Route 16 after it caught fire last night.

Owner of the surplus store Ill Kim says after he closed his shop at 5 yesterday, he got a call from his daughter a few hours later who passed by on her way to class. He says that she noticed a lot of smoke coming out of the building. Kim says after getting off the phone, he and his wife headed for the store right away. When he opened up the door, he says, all he saw were flames. Kim says they tried to get rid of the fire by hosing it down but it was too late. The blaze just got bigger and spread quickly. That’s when he decided to call for help.
Guam Fire Department Spokesman Lt. Ed Artero says they received the 911 call at about 8 last night. While firefighters fought the blaze, northbound traffic was shut down. He says thankfully, no one was injured.
Investigators are working to determine the cause of the fire. Lt. Artero says it was brought under control within about a half hour after fire units arrived.
Kim says he does not know what might have caused the fire. All he knows is that everything in his surplus store is damaged, from the furniture, to the clothes, to other equipment. He says he has not slept since the incident and he’s just been trying to clean up all the mess so he can reopen the store.