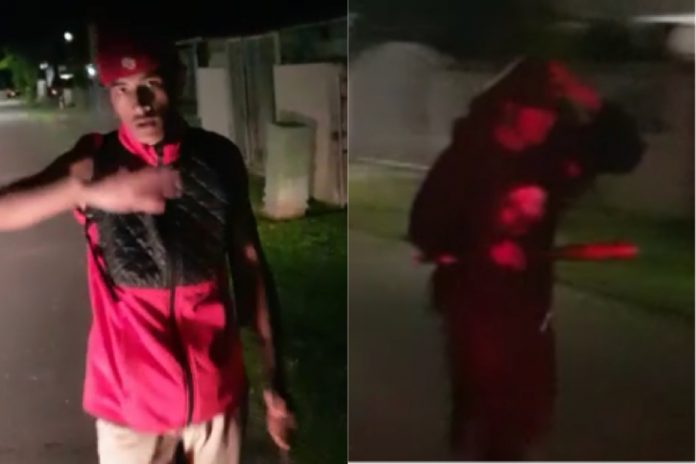 While two of the minors have since been taken into custody, the recent videos has the community calling for something to be done to control unruly minors.

In these recent videos, two teenagers can be seen threatening to assault neighbors with a machete and attempting to damage their property. The video appears to be taken by the passenger of a vehicle driving by the scene. The person holding the cell phone is then confronted by one of the teenagers but as soon as the man claims he’s a police officer, the teenager backs off.

However, later on in the video, the man recording the commotion on his cell phone gets into a verbal argument with the teens when one of them appears to strike the vehicle off camera. The driver of the vehicle can be heard moaning but it’s unclear if the driver was injured in the scuffle.

The man recording the assault can be seen getting down from the vehicle saying, “This is why I need my gun!” The video then cuts off.

This is not the first time criminal acts being committed by island youth have been captured on video. In fact, you may recall an elderly woman being assaulted in Harmon after a group of minors attempted to steal her vehicle.

There was also a group of minors arrested after they were accused of breaking into homes in Maite.

Guam Police Department Spokesman Sgt. Paul Tapao clarifies that the person who identified himself as a police officer is actually a law enforcement officer with the Navy’s Security Forces. But quick thinking on the cameraman’s part may have quite possibly adverted an attack.

The second video appears to show the same minors throwing rocks and anything they could get their hands on as they engage in an altercation with a woman and man on the same street.

According to Tapao, two of the minors depicted in the videos have been arrested. A 16-year-old boy was remanded to the custody of the Department of Youth affairs while a 19-year-old man identified as Emanuel Reselop was arrested on offenses of aggravated assault, criminal mischief and disorderly conduct. GPD states that additional suspects have been identified in this case.

But with such violent acts being committed by youth, Dededo Mayor Melissa Savares shared her concerns and is calling for harsher punishments on News Talk K57’s Mornings with Patti Arroyo show.

The most recent data shows a staggering rise in violent crime among minors. Juvenile delinquency is one of the most important issues facing Guam as a community and it appears to be on the rise, with crimes becoming increasingly sophisticated and dangerous while participants in the crimes are becoming younger.

Based on the latest data from DYA, the youngest client in their custody is only 9 years old.
While this is alarming, the number of crimes committed by youth is even more disturbing.

Here’s a breakdown between of the types of crimes and how many cases were recorded in 2015 versus 2016:

This raises the question: what can be done to curb crime among our youth? Can parents be held criminally responsible for the crimes committed by their children?

While this is not in direct to response to the rise in youth crime, GPD says in the wake of Typhoon Mangkhut, GPD has formulated a Crime Suppression Task Force that will be operating a 24-hour basis.