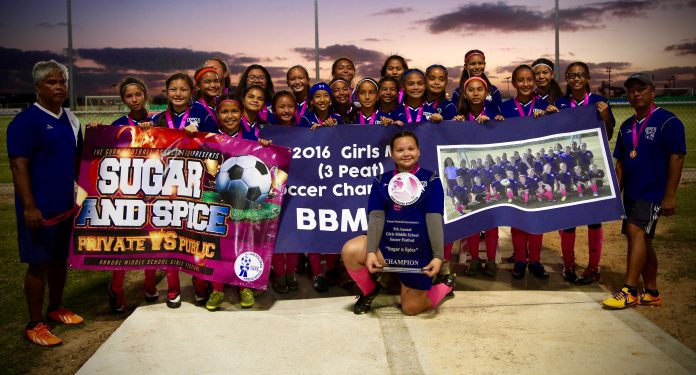 “I really enjoyed playing in this tournament – it’s fun and we get to play against teams from the other middle school league.”

“It took a strong team bond that we’ve built over the weeks of the season to make all this happen,” said the Obispos’ Lauren Phillips, a seventh grader at the Sinajana school. “Our coaches always tell us to stay focused on our game and work with our teammates to win for ourselves and for the school. That’s what we had to do to win.

“I really enjoyed playing in this tournament – it’s fun and we get to play against teams from the other middle school league. We get to see talent from the teams in the other league. We never played against Agueda until (Saturday) in the tournament final – we heard that they were really tough and aggressive in games and I think we prepared well for that,” added the 12-year-old, who also plays for the Guam Shipyard Wolverines in the Triple J Auto Group Robbie Webber Youth League.

The Obispos did their homework against the Pirates, countering their opponents’ physicality with good passing and speed on the wings. Phillips struck first for the Obispos, using her speed to needle through Pirates defenders and find space to slot in her shot from the left side to the opposite post. Minutes later, teammate Celine Cruz doubled her team’s advantage after chasing down a through ball and finishing a one-on-one play with the AIJMS keeper for the eventual final score.

St. John’s School finished in third, defeating the Seahawks 4-1 in the tournament’s consolation match. Jadyn Palomares scored three for the Knights in the win and Gabby DePriest also scored. Logyn Lallatin scored for the Seahawks.

The Roadrunners were recognized as the tournament’s silver bracket winners in an awards ceremony following the championship match.

The festival, part of GFA’s youth development program supported by Japan Football Association, and an event as part of the FIFA Live Your Goals campaign in Guam, provides an opportunity for players from two different interscholastic middle school girls soccer leagues to play in a single-day tournament in one venue. The tournament also kicked off a weekend of girls and women’s soccer in celebration of International Women’s Day and AFC Women’s Football Day, traditionally observed on March 8.