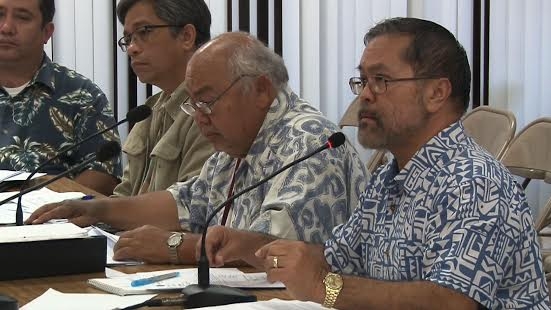 Things got heated during Friday morning’s hearing where Vice-Speaker BJ Cruz tried to get BBMR to admit that it’s revenue projections are wrong and GovGuam won’t be able to collect the amount of money it budgeted for this fiscal year.

Guam – Will GovGuam collect the revenues it budgeted for this fiscal year? That’s the question Vice-Speaker BJ Cruz asked and despite a current $16 million dollar shortfall in the latest CRER and despite being short by about $60 million dollars for the last two fiscal years the Bureau of Budget Management and Research is adamant that GovGuam can realistically reach this year’s adopted revenues levels.

“Try to get you all to help us all of us together come to a realistic realization of what the budget projection is going to be for next year,” said Cruz.

The latest CRER from June showed a $16 million dollar shortfall. Despite this BBMR director Joey Calvo insisted that they can collect enough money to meet revenue projections for this year. “This year when you’re admittedly already $16 million dollars below by your own actuals. Your actual collections and what you actually anticipated for it to be at the end of the third quarter and you tell me you need to collect $216 million dollars over the next for July August and September. Where do you figure you’re going to raise the money?” asked Vice-Speaker Cruz. “What was OFB projection for last year? The reason why I’m asking Vice-Speaker is important for us to because it’s easy to be a Monday night a Monday quarterback,” said BBMR Director Joey Calvo. “We see it but you won’t and you keep telling us that we’re going to,” said Cruz. “Yes based on what we see we’re going to. Of course you on the opposite side you’re going to say we don’t see but I’m saying we’re anticipating and were projecting,” said Calvo. “Well just take the BPT. You guys last year said we’re gonna make over $270 million dollars in BPT. When I reduced it to 247 the Governor hollered and screamed that I denied him $40 million dollars in his budget,” said Cruz.

“It’s easy to be a Monday night quarterback than when you’re in the game. It’s easy to say afterwards that you didn’t collect than when you’re trying to project based on whatever data you have or resources you have to just project what the number is. Did you project that to be forthcoming that you were gonna be $26 million dollars short? Do you know what $26 million dollars is in an $800 million dollar pie? It’s one percent two percent,” said Calvo. “It’s enough to send us into a deficit,” said Cruz. “It’s a 98 percent of collection rate Vice-Speaker I think that’s pretty good. If I had 90 percent in my class that would be an A,” said Calvo.

However the Speaker pointed out that these all add up and in the end these mis-projections have added up to a cumulative $120 million dollar deficit over the last two fiscal years. This is why the Vice-Speaker is concerned that we won’t meet revenues for this fiscal year.

“Do you expect that we’re going to meet it?” asked Cruz. “And I said yes and I keep saying yes but you keep on obviously you’re of a different opinion but you’re asking me and I’m saying yes,” said Calvo.

BBMR was adamant that their revenue projections are realistic. Calvo told lawmakers that one of the things they are doing to meet revenues is to step up collection efforts on some $161 million dollars in taxes that are due to Rev&Tax.