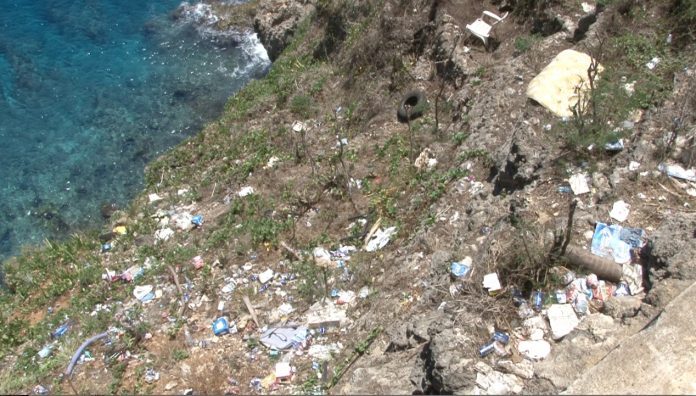 Guam law gives jurisdiction to the Guam EPA to regulate and control illegal dumpsites around the island.

Guam – Despite multiple cleanups, one of Guam’s favorite scenic views in Jonestown continues to be used as an illegal dumpsite.

The Jonestown lookout is one of Guam’s most scenic views because of the miles of ocean visible from the cliff line, but that view is tarnished by the tons of trash visible all around the site.

So what is being done to clean up the site? PNC contacted the Tamuning mayor’s office and was told that the area is private property. According to Vice Mayor Kenneth Santos, this prevents them from entering the property to clean it up. But he tells PNC that the site was just cleaned up last week and just within a 7-day period, the trash piled up again.

Guam law gives jurisdiction to the Guam EPA to regulate and control illegal dumpsites around the island. If the site is on private property, GEPA is required by law to work with other agencies to find the landowner. If the site continues to accumulate trash, the private landowner can face fines and citations from GEPA.

Back in 2013, GEPA won a $7 million lawsuit against Joseph and Rosalind Taitano for an illegal dumpsite on their Yigo property. GEPA sued the two individuals on counts of negligence, public nuisance and violations of Guam’s solid waste management and litter control act.

Meanwhile, Santos says that he has found illegal dumpsites in Tamuning on a weekly basis. In one site in particular, he says he posted a sign saying the area was under surveillance and the dumps stopped.

Additionally, PNC was able to locate illegal dumpsites in Toto, Harmon and Tamuning.  One site in Toto was smoldering for several days and littered with empty propane cans.

The MTM mayor did not return our multiple phone calls regarding the Toto dump sites.

GEPA did not respond to our request for comment as to whether or not they have contacted the private owners of the Jonestown lookout illegal dumpsite.