Guam – The Orange Crushers proved once again why they currently are the top women’s soccer team, this time making history by becoming the champions of the Inaugural Beck’s Women’s GFA Cup yesterday at the Guam Football Association facility in Harmon.

The Crushers claimed the victory in dramatic fashion with a 3-2 win over Hyundai in extra time.

Although the Crushers led 2-1 at halftime, the game was far from over for Hyundai. The Crushers’ first scare of the second half came on a high, 35-yard strike off the foot of Tanya Blas-Cruz that arched straight to the goal. Luckily for the Crushers, the shot bounced up in front of the goal and hit the crossbar back into the field of play. Although the Crushers were able to preserve their lead for about another 20 minutes, Hyundai’s Arisa Recella used her speed to weave through her opponents, knocking in the equalizer past Crushers’ keeper Brandi Potter. From then, both teams beefed up their defenses to delay the game-winning goal in regulation time.

The Crushers caught a break 12 minutes into the first half of extra time when Kimberly Sherman was knocked down by a Hyundai defender near the goal with possession of the ball. The infraction afforded the Crushers a penalty kick, which Kristin Thompson launched up and over Hyundai keeper Jena Cruz for the eventual game-winning goal.

Thompson also scored in the first half of regulation time after winning the ball against Cruz. With the goal undefended, Thompson snuck in her shot from along the goal line. Simie Wilter was credited with the Crushers’ first goal. For many spectators, including the Crushers’ bench, Wilter’s shot looked to have sailed long in front of the goal, but it was deemed that her shot crossed the goal line and exited through a hole in the upper left corner of the goal net.

The Crushers also defeated Hyundai earlier this year to finish the Bud Light Women’s Soccer League as undefeated champions. Thompson earned the Golden Boot distinction by knocking in the most goals during league play.

The Cobras and the Bank of Guam Crushers were the last two teams to make the quarterfinals of the Beck’s 5th Annual GFA Cup soccer tournament with wins posted Saturday against the Sinajana Ambassadors and Big Blue (Div. II), respectively. 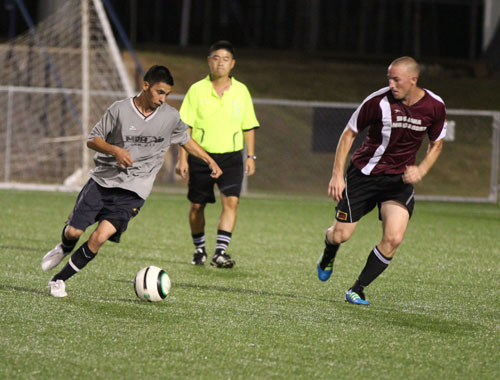 [The Cobras’ Gregory Rodriguez (silver) stays in control of the ball facing defensive pressure from the Sinajana Ambassadors’ in a Round of 16 match of the Beck’s 5th Annual GFA Cup Saturday at the Guam Football Association facility in Harmon.]

The Cobras beat the Ambassadors 5-2 in an aggressive game that saw six yellow cards between them and the Cobras’ goalkeeper Jonathan Reyes exiting the game with a red card violation. Gregory Rodriguez led the Cobras with a hat trick and teammates Branden Casil and Aaron Cruz chipped in one each. Chris Markey scored twice for Sinajana. The Cobras next face Cars Plus FC Saturday at 7 p.m. in the quarterfinals.

Bank of Guam will next face Guam Shipyard Sunday at 5 p.m. in the quarterfinals after defeating Big Blue (Div. II) 4-1. Chris Cochran scored twice for the Crushers and teammates Kyle Mesa and Daniel Nam scored one each. Big Blue’s lone goal came from Keith Surber.