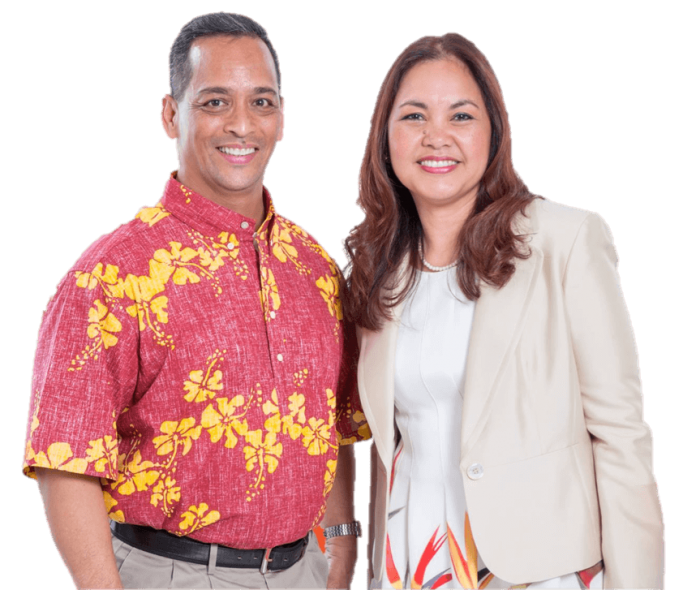 Guam – Immediately following a Guam Election Commission board meeting in Hagatna on Wednesday night, Democratic gubernatorial primary challengers Aguon/Limtiaco issued a news release stating their disappointment that the GEC had just rejected the team’s request for a hand recount of all ballots cast during the August 25 islandwide primary. 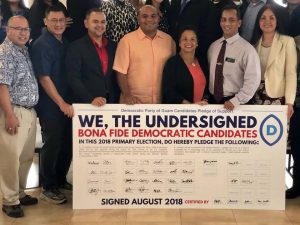 The team’s statement comes not only on the heels of the Election Commission’s declination, but after Sen. Frank Aguon, Jr. and his running mate, Alicia Limtiaco, broke their signed pledge to the Democratic Party of Guam that they would not mount a write-in campaign.

The DPG Pledge reads as follows:

BONA FIDE DEMOCRATIC CANDIDATES IN THIS 2018 PRIMARY ELECTION, DO HEREBY PLEDGE THE FOLLOWING:

A. To publicly declare my whole-hearted support of the Guam Democratic Party’s slate of nominees which will be duly selected during the August 25, 2018 Primary for the U.S. Congress, the Guam Legislature and Governor and Lieutenant Governor. I shall work with my supporters to help all the chosen candidates secure a Democratic Party victory during the General Election on November 6, 2018;

B. Should I not be successful in the Primary Election, I pledge not to run as a write-in candidate nor to encourage any of my supporters to sponsor any such write-in movement. And should such a write-in movement begin, I shall forthwith publicly repudiate it.

Yesterday the duo issued a statement that essentially said the desires of everyday people are far more important than any pledge. It reads in part:

“Politics and parties are fine. But they are not, and never should be more important than the people and what the people want,” Aguon continues. “Alicia and I believe that people deserve their right under the authority of law to exercise all options available to them to elect their leaders, not just settling for what they think is the ‘lesser of two evils.’”

According to Aguon, “A write-in has never been successful in almost 40 years in Guam’s political history, but if that’s what the people of Guam want, we will give that option the consideration it deserves.  Alicia and I understand the importance of party and its role in our democracy but we are also cognizant that, the true power in this democracy lay with the people. The write-in provision is afforded to our people by law and the exercise thereof should not be infringed by any one person, team or party. Alicia and I have decided not to stand in the way of the write-in campaign started by Citizens for Public Accountability and Guamanians for a Fair Government.” says Aguon.

A. Order for judicial review of the validity of any and all ballots cast by voters on August 25, 2018 that the GEC claims to be “Spoiled,” or “invalidated” due to crossover voting.

C. Issue a Temporary Injunction or Temporary Restraint Order preventing GEC from certifying the August 25, 2018 Primary Election results until and unless all irregularities cited herein are fully addressed and resolved in accordance with Guam and Federal Law as well as the Plaintiff’s [rights] for due process.

Leon-Guerrero’s complaint is filed, pro se, without the aid of an attorney, and names the Government of Guam and Guam Election Commission as defendants. An Election Commission source has disclosed to Pacific News Center that the GEC has yet to be served any such lawsuit, so there is no viable way the Commission can respond or comment.

We remained steadfast and focused on the automatic recount process.  We requested for the recount to be conducted via hand count, which the Guam Election Commission (GEC) previously denied.  It is our position that we are entitled to a hand count in accordance with the law and we again renewed our request for the hand count with the GEC.  This would also include the review and examination of ballots referred to and/or designated as spoiled, rejected, defective, void, voidable; ballots reviewed during the reconciliation/resolution process; ballots wherein the vote tabulating device registered invalid votes or ballots, and other ballots referenced in our earlier requests.  Since those ballots necessarily involved both the discretion and hand count by GEC and/or election officials, a recount via hand count is necessary to replicate that process.

“We are very disappointed in the Guam Election Commission’s decision to deny our renewed request for a recount to be conducted by hand count.  Unfortunately, the motion for a recount was denied by our Democratic Party representatives on the Commission,” Attorney Limtiaco stated.

“It is critical and significant to state that this is the first time in the history of Guam since the 1970’s that the gubernatorial race within the Democratic Party has been as close as it is this 2018 Primary Election, with the difference in votes being less than 2%,” Senator Frank Blas Aguon, Jr. stated. “We are deeply humbled and thankful by the outpouring of support during this past week.  Alicia and I remain positive and will be discussing our next steps.”

Should you have further questions or would like to request additional information,