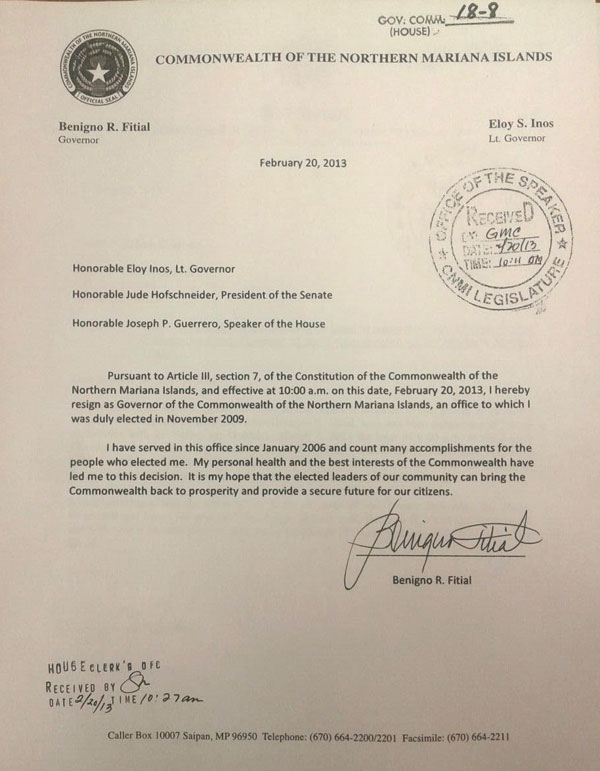 Guam – Benigno Fitial this morning [Wednesday] resigned as Governor of the CNMI in the face of a pending impeachment trial in the Commonwealth Senate.

His resignation letter was delivered by Press Secretary Angel Demapan to the CNMI Legislature this morning. The resignation took effect at 10am today, Wednesday, February 20th.

Lt. Gov. Eloy Inos is being sworn in as CNMI Governor and Senate President Jude Hofschneider as the new Lieutenant Governor at 1:30pm today.

Just yesterday [Tuesday] Fitial had been summoned to appear in the Senate on March 7th for the start of  his impeachment trial.

Print out Fitial’s resignation letter HERE or read it below:

In a brief, 2 paragraph resignation letter, Fitial writes:  “I have served in this office since January 2006 and count many accomplishments for the people who elected me.”

He goes on to explain:  “My personal health and the best interests of the Commonwealth have led me to this decision. It is my hope that the elected leaders of our community can bring the Commonwealth back to prosperity and provide a secure future for our citizens.”

Last Friday, the CNMI Senate voted 8-0 last to adopt the rules for that trial, which would have been the first ever impeachment trial in the history of the CNMI, or any other U.S. insular area.

The Senate trial was scheduled after the CNMI House finished voting on 18 felony counts against the Governor.  It took them 2 days to deliberate and approve all of the allegations with 16 or more of the 20 House members voting in favor of impeachment.  Only 14 votes were needed on each count.

Fitial had only 4 allies in House the who voted “no”  on almost every one of the 18 articles of impeachment.

Conviction in the Senate would have been tougher. It would have taken at least 6 of the 9-member Senate to convict Fitial.

However there won’t be a trial now.