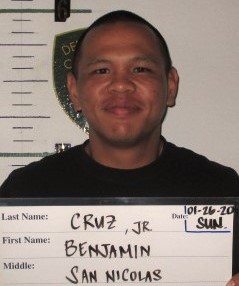 Last Saturday, April 25th, a video surveillance camera caught pictures of a man breaking into a home in Santa Rita. He was identified as Benjamin Cruz, according to Sgt. Tapao.

The car was traveling at a high rate of speed on Route 2 in Agat. It eventually came to an abrupt stop along North Santa Cruz Street in Agat.

The man inside exited the vehicle and fled on foot, Sgt. Tapao says the officers recognized him as being Benjamin Cruz.

The officers pursed and caught him without further incident.

Cruz was booked and confined on a variety of charges including criminal mischief, illegal possession of a schedule II controlled substance, reckless driving, no drivers license, and eluding a police officer, among other charges.

Cruz was booked and at the Department of Correction and the case was sent to the Office of the Attorney General for prosecution.