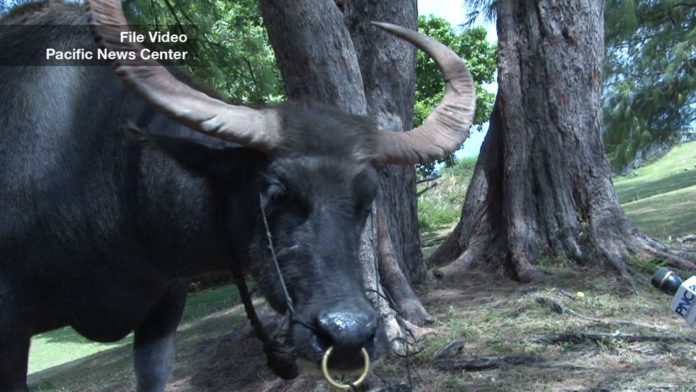 Tedtaotao, who was known for offering free rides on his carabao Betsy at Fort Soledad in Umatac, passed away in January of last year. According to Umatac Mayor Johnny Quinata, Tedtaotao’s beloved carabao Betsy passed away this Sunday a little over a year after the death of her owner.

When Tedtaotao passed away, Betsy went under the care of his nephew. Mayor Quinata says Betsy was about 30 years old which is old for a carabao and he says she passed away of natural causes.

On Sunday, she was tied up in a grazing area near the Umatac bridge.  That’s when residents noticed that she was lying down in the sun and didn’t look well so the mayor and his staff lifted her onto a trailer and moved her out of the sun into the shade where she took her last breath.

Mayor Quinata is asking if GVB can put a carabao statue next to the hut that was dedicated to Big John Tedtaotoa. Tedtaotao and Betsy gave rides to spread the Chamorro culture. He accepted donations but never charged for the rides.