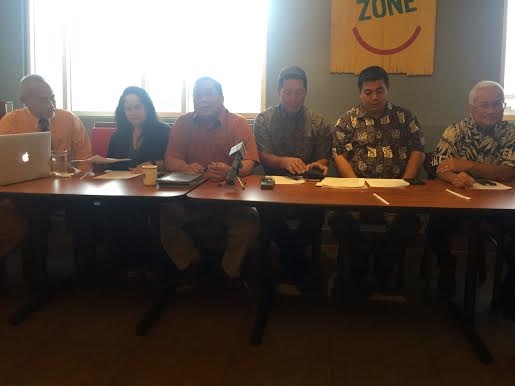 Aside from the Aleutian islands, Guam was the only piece of American soil that was occupied by enemy forces during WWII.

Guam – A bi-partisan group of advocates for war reparations announced today(Mon) that they will be forming a non-profit organization to file a lawsuit against the federal government.

“What you see here is a group that was formed after many months of discussions so that we can file suit against the federal government for war claims for our living survivors,” said Senator Blas.

Aside from the Aleutian islands, Guam was the only piece of American soil that was occupied by enemy forces during WWII. Many natives of Guam suffered under the two year Japanese rule.

Former special counsel for the U.S. Department of Justice Juan Carlos Benitez said, “The war reparations provided to the citizens of Guam was less than what was provided to the other war survivors of that war and that was determined to be completely unfair.”

The Chairman of the foreign claims settlement commission at that time was Maricio Tamargo who has now agreed to take those cases along with fellow DC Attorney Jason Poblete and Jeremy Ibrahim. “The Congress and the president have provided funding for other causes of action one specifically was the holocaust survivors and reparations to the tune of $4 million dollars for each of the Americans who were held hostage in Iran back in 1979,” said Senator Espaldon.

“You know the effort of war claims and seeking justice has never been about money it’s always been about recognition,” said Babauta.

“The children should never give up for what is rightfully owing to the greatest generation that ever lived. To our parents and grandparents that we never forget that the freedoms we have today is because of the sufferings and atrocities that they had to go through,” said Senator Barnes.

The group says the lawsuit will be privately funded and they hope to file the suit in Washington DC before the end of this year.