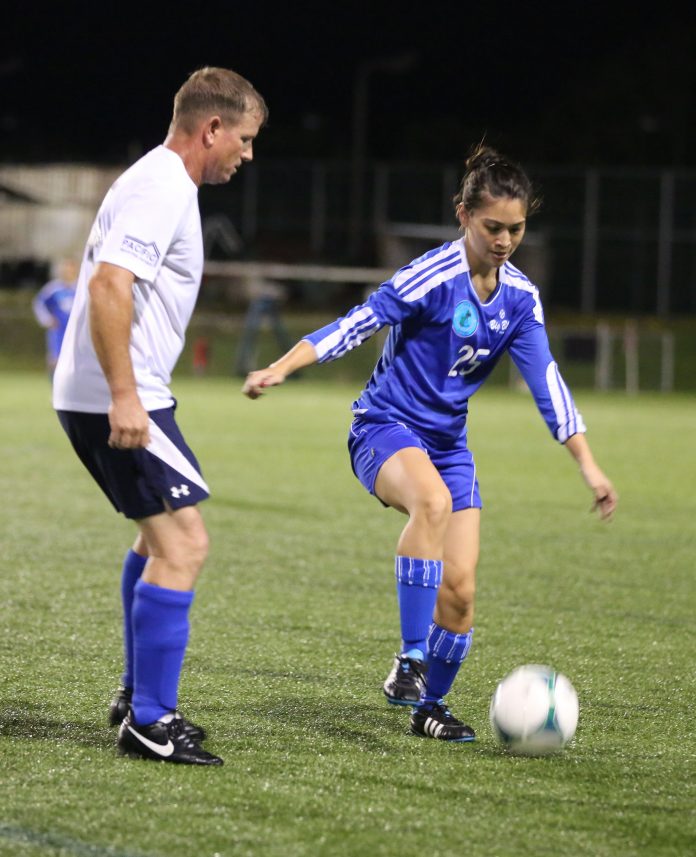 Big Blue began scoring as early as the third minute. Big Blue’s Yvonne San Nicolas chipped the ball over Strykers’ defenders toward the goal and teammate Pepito Bedia, Jr. finished the play with a shot from the right side to the opposite post. Later, Big Blue’s Noel Casilao gave his team the 2-0 advantage after connecting on Bedia’s free kick in the 22nd minute. Casilao first collided with Strykers goalkeeper John Sivigny on the play, but was able to get back up for a follow up shot.

With four minutes left in the first half, Big Blue’s Young Chang put his name on the score sheet with a lobbed shot over Sivigny that managed to roll into the goal.

The Strykers had several chances to score in both halves, but were unable to convert. Despite the loss, the Strykers have played more games than Big Blue and still sit in first place in league standings based on points. Big Blue’s opening week match against the Rovers that wasn’t officially played as scheduled, has been rescheduled to 7 p.m. Aug. 20.

In the day’s earlier match, Hyundai Family FC earned its first win this season with a 3-0 shut out of IT&E/IP&E to move up one spot in the league rankings. With five minutes left in the first half, IT&E/IP&E goalkeeper Bob Kelley mishandled a shot by Hyundai’s John Oh to allow the first goal of the match. In the final seconds of the first half, Oh struck again, this time taking a Byung Choi through-pass straight to the goal. Kelley attempted to stop the pass early, but Oh managed to divert the ball away from Kelley and take his shot from close range.

Sang Won Park later iced his team’s victory with a header from a corner kick play in the 80th minute.

Co-Ed Masters League matches continue Saturday with Big Blue taking on IT&E/IP&E at 6 p.m. at GFA, followed by the Rovers FC against Hyundai at 8 p.m.