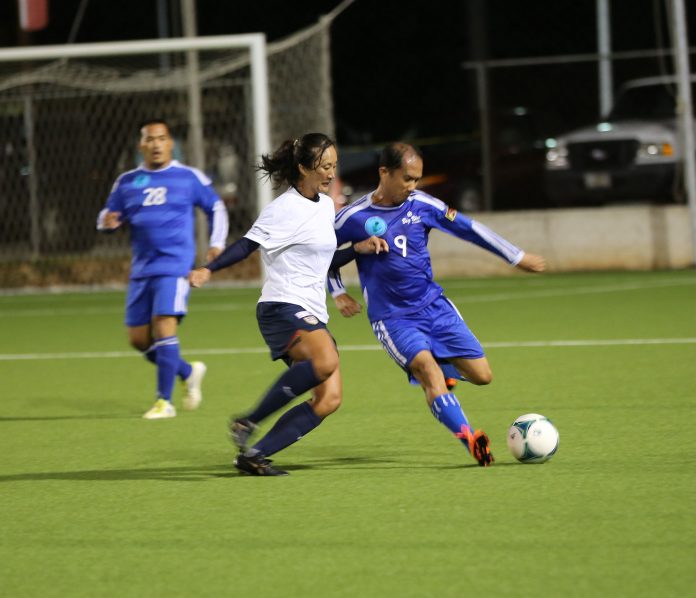 Big Blue’s final match will be at 6 p.m. Saturday against IT&E/IP&E, a team Big Blue had beaten 4-0 in its earlier match up this season. The Rovers FC, the other team vying for the championship title and currently tied with Big Blue based on points, will play at 8 p.m. Saturday against Hyundai Family FC. Hyundai Family FC is the only team that managed to shut out the Rovers this season – defeating the league frontrunners 2-0 on July 27.

Big Blue needs a better result in its match than the Rovers to claim championship honors. If the two teams emerge with the same result, be it a win, a loss or a draw, the Rovers will have the edge based on head-to-head points.

In Week 9’s matches, the Strykers and Big Blue were both in a must-win situation in order to stay in contention for the league title. Big Blue struck first with the league’s current Golden Boot leader Pepito Bedia, Jr. notching the match’s lone first-half goal.

In the second half, Big Blue’s Jack Kido iced the win for his team with a header-for-goal off of a corner kick. The Strykers’ Jaime Ortega later prevented a Big Blue clean sheet with a distance strike from the left side, but the Big Blue defense then managed to contain its opponents through to the final whistle. With the loss in its final match of the season, the Strykers settle officially in third place in the league standings.

In the night’s other game, Hyundai Family FC defeated IT&E/IP&E 3-1. Hyundai’s Sang Won Park slotted his team’s first goal in the 36th minute and teammate Byung Choi added the eventual game-winner just a minute later. Chul Woo Park added one more goal for the winning team in the 50th minute. IT&E/IP&E earned its first goal in the 72nd minute when Kamran Sabeti drilled his shot from the left side to the opposite post with dazzling accuracy.

The Co-Ed Masters league concludes Sept. 7 with the season’s final matches at 6 p.m. and 8 p.m. There is no admission fee to watch the matches.