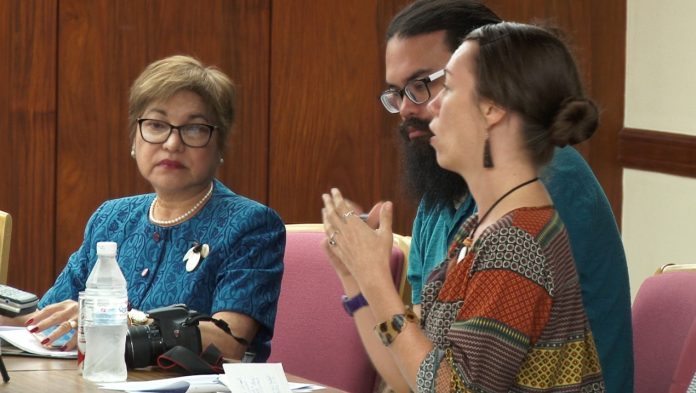 Speaker Judi Won Pat voiced her concern on who would be educating eligible voters on Guam’s self-determination.

Guam – Today, the commission on decolonization passed a motion to adopt Governor Eddie Calvo’s education plan on self-determination but not without adding specific language to the motion.

At a more cordial pace, commission members discussed whether or not to approve a motion set forth by Senator Rory Respicio to adopt the Governor’s education plan towards self-determination. The motion was passed but not before some discussion on when the plebiscite vote should be held.

Victoria Leon Guerrero said, “The commission votes to collaborate with the governor in an aggressive educational campaign in which all educational materials are created by experts with approval from the commission and secondly that it follows the legal process currently defined for determining the political status of the island of Guam.”

Governor Eddie Calvo however maintained that his issue is about the 70 percent requirement for a vote. He says he has an issue with the law and thus he sent a letter to the attorney general of Guam to clarify what the law means. Nonetheless, the motion passed to include that the education plan will be in compliance with the law that says the only eligible voters on Guam’s self determination are “native inhabitants.”

Ultimately, the commission on decolonization has the final say on which educators will be used in Calvo’s plan.

Additionally, Victoria Leon Guerrero wanted to set up a way on how the commission will spend any future monies. She voiced concern that they could get bogged down having to follow the Governor’s office procurement laws. Both Senator Respicio and Calvo said they would look into the issue.

Speaker Won Pat said discussion on the plebiscite and the 70 percent requirement should take place in July at the completion of the education program. Won Pat says between now and July, the attorney general should have issued an opinion clarifying the plebiscite law.