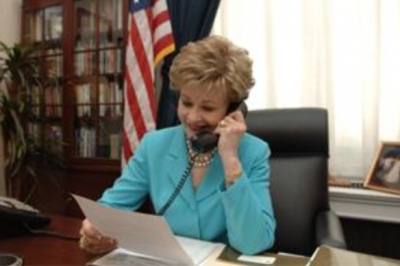 Congresswoman Bordallo made back to Washington D.C. just in time to get her amendment in for a bill that places COFA migrants on the bottom of the list for Guam public housing assistance.

Washington D.C. – The clock was against her…but Guam Congresswoman Madeleine Bordallo made an almost impossible ‘save’ after a 21-hour flight from Guam to Washington…racing to the House floor to win passage of a long-sought housing measure.
It wasn’t football, baseball or hockey…but for Guam’s Madeleine Bordallo, just off a plane from almost a day in the air, it was one for the ‘books’—a ‘clutch play’ for the legislative books.
Racing from the airport…and running for re-election… Bordallo knew she had to get to the House floor to save her amendment to a housing reform bill—a rider to give US citizens and nationals priority over FAS migrants for housing subsidies.
Bordallo had just missed by minutes, her chance to offer her amendment as a free-standing measure…but that didn’t stop Bordallo from salvaging her proposal.
Reaching the floor in the midst of debate, Bordallo hastily worked with Texas Democrat Sheila Jackson Lee who was also offering an amendment—
“Unfortunately, one of our dear colleagues from Guam missed her time to offer her amendment…and I’m going to ask unanimous consent to offer my amendment, with a modification at the desk with Ms. Bordallo, and yield her one-minute to be able to discuss her amendment, at this time,” said Lee.
Suddenly, Bordallo had her chance—
“I continue to support allowing these migrants to receive housing assistance, otherwise, our housing situation in Guam and other affected jurisdictions would get even worse.  However, it was not the intent of Congress to displace our citizens, when it extended eligibility to migrants in 2000.  Unfortunately, limited resources have led many US citizens in Guam to be displaced by COFA migrants,” said Bordallo.
Bordallo says Guam’s Housing Authority says the demand for housing help far outweighs the resources available.
Bordallo pointed to local data that 42-percent of Guam’s homeless– 536 Chamorros and 42 Philippinos–are Guam residents.
The House passed by voice vote, Jackson Lee’s amendment with the Bordallo language, salvaging what could have easily been a huge missed opportunity in an election year.   The amended bill now heads to the Senate.