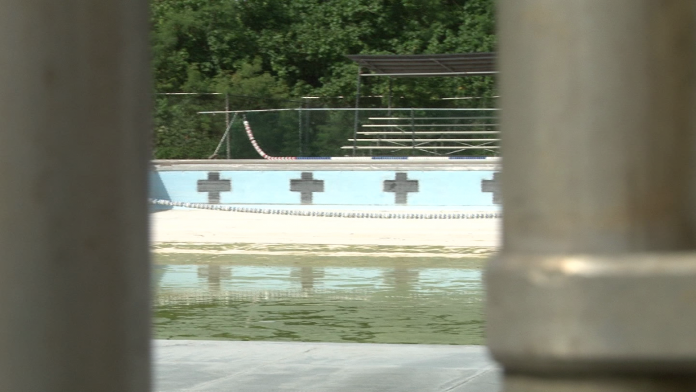 Guam – Bureau of Budget and Management Research acting Director Lester Carlson agrees the bar has been set even higher with his and Dept. of Administration acting Director Ed Birn’s retention to lead their respective agencies.

But there’s no denying that there are still many outstanding issues that have been carried over from the previous administration–like hundreds of thousands of dollars in unpaid utility bills and other maintenance work at the Department of Parks and Recreation.

Carlson also gave his two cents on a bill to repeal 4 cents in the liquid fuel tax and 1 percent from the GRT.

Tarnished green water fills the Agana Pool instead of the bright blue you would expect from a public recreational pool. That’s because the process of maintaining the swimming pool has been at a standstill for months now, thanks to an unpaid water bill and the absence of regular upkeep.

“It was brought to my attention the third week of November after a significant bill had already accumulated. When I went down to the pool, I met with Waterworks, I met with Parks and Rec, and it was a desire, a very, very strong desire from the Calvo Administration to address this and address it immediately,” explained Carlson on News Talk K57’s Mornings with Patti.

Now, more than a month later, harmful murky water continues to fill the Agana Pool and regular patrons are forced to go elsewhere or not swim at all.

Of the $900,000 owed to Guam Waterworks Authority, $500,000 is for the Agana Pool alone. The remaining $400,000 is for remaining properties under the Department of Parks and Recreation.

So what’s the holdup?

“The pumps that recirculate the water in the pool were being worked on,” he noted. “For all intents and purposes–yeah I have the luxury of a little bit of time for the pool because even if the water was turned on, they’re still working on the pumps. But the other areas–I spoke to [DPR acting Director] Richard Ybanez about this yesterday–the other areas that need to be addressed at the Agana Pool should begin immediately; spruce it up in preparation for the opening of the pool and he needs some resources to do that and I fully understand that.”

While this may or may not be a budgeting issue, Carlson says efforts to repeal taxes could derail future operations at Parks and Rec and many other GovGuam agencies.

In his first day in office, Republican Sen. Jim Moylan introduced two bills, one to repeal the business privilege tax from the current 5 percent back down to the previous 4 percent and the other to reduce the liquid fuel tax rate by 4 cents per gallon. If successful, the measures could translate to $70 million in revenue shortfalls.

“I don’t know [how] he’s going to replace $70 million nor do I think it’s prudent or any way possible to cut government services by $70 million,” Carlson expressed. “So if we didn’t have those revenue enhancements and we don’t keep those revenue enhancements going into the 2020 budget, then some of the federal mandates that the, unfunded federal mandates, that we continue to be burdened with will rear its ugly head and you’ll see it trickle down as it has already in the case of Dept. of Parks and Recreation. We are not able to provide the life guards, the grounds workers, the maintenance, the people that are there ensuring our safety and ensuring that the parks are kept clean and life guards at the pool.”