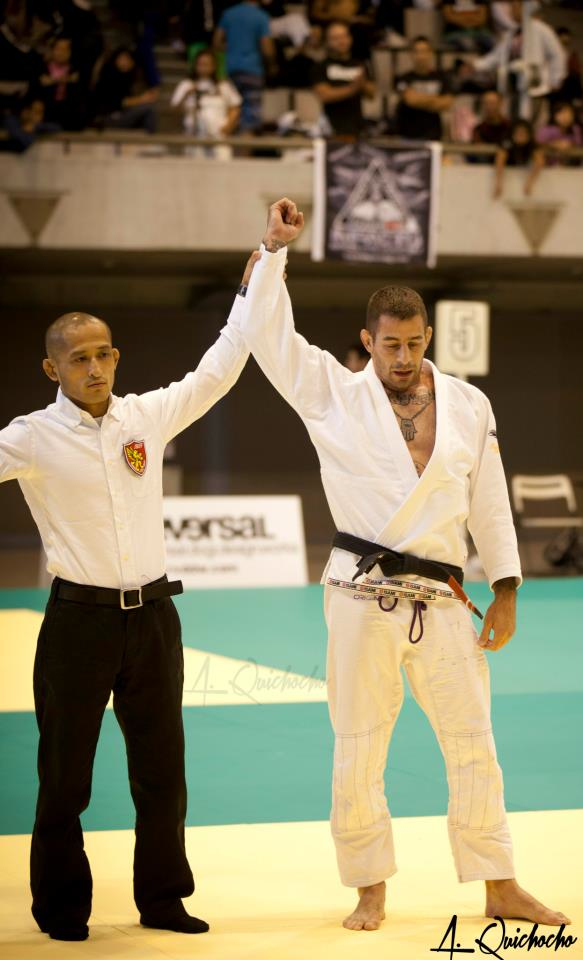 (Hagåtña, Guam) – He’s a Brazilian Jiu-Jitsu World-Class Multi-Champ. He’s a second degree BJJ black belt and a Philadelphia gym owner. And next month Jared Weiner will be on Guam to help train athletes and assist with the officiating of the February 23rd Marianas Open BJJ Tournament at the Father Dueñas Phoenix Center.

“I will be there to help Promoter Steve Shimizu with whatever he needs to make things run smoothly,” Weiner said. “I will assist with reffing and whatever he needs done. I will ref the higher level matches and make sure things are done with no bias and [are] completely fair from an outsider’s perspective. All these athletes who are participating have been training really hard, and I am excited to watch all matches go down. It’s gonna be a good time for sure.”

[Photo: Jared Weiner wins his match in the most recent Asian Open]

“He’s won big on the world stage, and now he’s giving back,” Shimizu said. “Shoot, this guy even helps train fellow officers in BJJ hand-to-hand combat and self defense. In fact, Jared will invite law enforcers to train with him when he gets to Guam.”

“Wherever my friends take me, I’m along for the ride,” Weiner said. “It’s my second time on the island, and I have been wanting to come back since my plane took off last time I was there. I have trained on the island for a few weeks before leading up to the last Asian Open. The level of BJJ on the island is just as strong as anywhere else in the world. [The] sky is the limit for any of the athletes on the island; the raw talent and skills are there. It’s just a matter of putting in the work, and the guys I have trained with on Guam work OVERTIME!”

Registration for contenders is open during the week before the February 23rd tournament at the Fokai shop in Hågatña. Doors to The Phoenix Center open at 8:00 a.m. First fight starts at 8:30 a.m. The Phoenix Center is located on the Father Dueñas Memorial School campus in Tai, Mangilao. For competition information about the Marianas Open, please call Steve Shimizu at (671) 777-9044 or Tony Bashaw at (671) 687-1140. The February 23rd Open will feature a $1,000 Brown Belt Absolute Grand Prix “Winner-Take-All” subdivision competition.