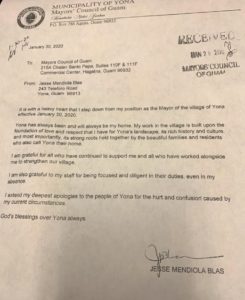 Four months after his arrest on federal extortion and bribery charges, Jesse Blas has finally stepped down as mayor of the village of Yona.

Mayors Council Executive Director Angel Sablan announced the resignation this morning during a news conference at the MCOG office in Hagatna.

“It is with a heavy heart,” writes Blas “that I step down from my position as the mayor of the village of Yona effective January 30.”

“I extend my deepest apologies to the people of Yona for the hurt and confusion caused by my current circumstances,” he concludes.

“It’s a relief for the people of Yona,” said Sablan, “because now there is some certainty to move forward. Now we know where we’re going.”

In a statement, Governor Lou Leon Guerrero said: “The Mayor’s resignation allows the residents of Yoña to move forward, allowing members of that community to fill a mayoral vacancy in the manner already determined by law. ”

The next step lies with the Guam Election Commission.

Executive Director Maria Pangelinan says the Blas resignation letter will be discussed during the next GEC meeting scheduled for Thursday, Feb. 6.

The commission will have to officially declare a vacancy exists in the office of the Mayor of Yona.

Candidates will then be given 30 days to file for the office.

A special election would then have to be scheduled and Pangelinan said the soonest that could occur would be late March or early April.

A special election will cost about $23,000, said Pangelinan, which the GEC does not currently have.

She said that amount will be added to the $600,000 supplemental budget request that GEC is already planning on submitting to the legislature.