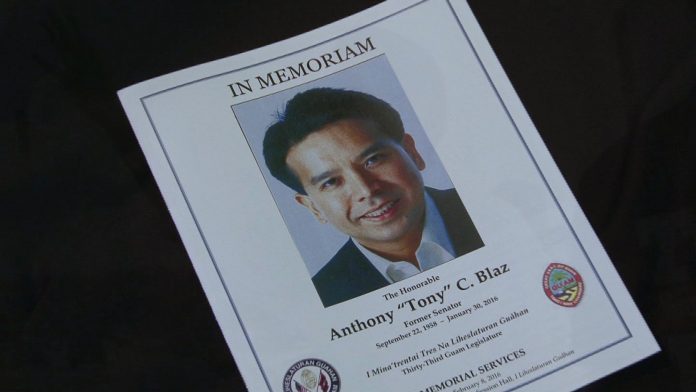 Guam – Hundreds were in attendance at former Senator Tony Blaz’s state funeral today as he was remembered for his optimism and kindness as a family member as much as he was a public servant.

The memories were infinite and filled with true friendship, as Chief Justice Robert Torres recalled during his eulogy of former Senator Tony Blaz who passed away late last month.

Torres covered all aspects of Blaz’s life, beginning in their youth, to their first summer jobs as janitors for a local theater, to graduating from high school and college together and finally, as grown men.

Torres described Blaz as someone who was inherently humble and wise.

“We learned valuable life lessons and I’m confident this experience helped shape Tony’s public service career because he appreciated the working class and the dedication and sacrifice it takes to perform well at a job,” Torres said.

As a sibling, Torres said, Blaz taught him a valuable lesson in forgiveness and the bond of family. Torres recalls a time when his own brother had gotten into an accident on his bike despite Torres warning him not to use his motorcycle.

“To this day, I remember him saying, “You can get another bike but you can’t get another brother. Be happy he was not hurt.’ Kin and Mark, this was your brother,” Torres said to Blaz’s two brothers sitting in front of him, “and I know he loved and cared for you with the same type of regard.”

“Describing him as a devoted father is an understatement. He taught his four children, Kimberly, Maria, Joaquin and Kristina to respect others as he had been taught and arm them with the strength of faith and love he provided for them and raised them with the courage and conviction that’s so rare for a single male parent,” said Torres.

Even after Blaz suffered from a stroke in 2006, Torres says Blaz continued to be the father he wanted to be for his four children.

“We grieve the untimely death of our great friend and public servant, Senator Anthony Crisosotomo Blaz, but we rejoice knowing that our dear son, brother, father and friend has done everything in his human capacity to deserve the reward of our God and the love of his people,” he concluded.

Senator Blaz served five terms as a senator and filled many leadership roles in GovGuam, most recently as the director of the Department of Administration.

He will be laid to rest Tuesday at the Pigo Cemetery in Anigua.